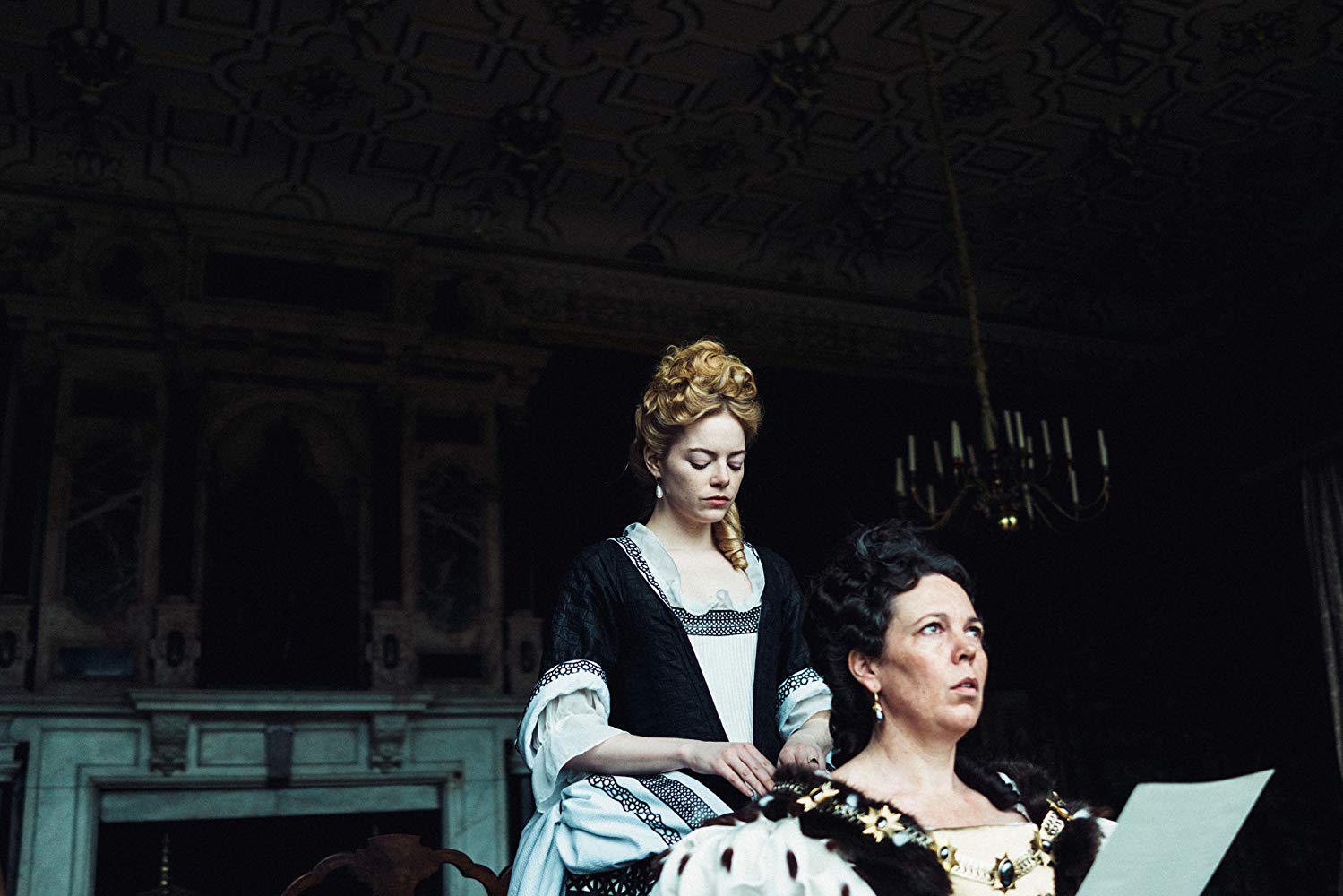 Two women compete for the affections of the Queen in The Favourite. In 1708 Great Britain, Queen Anne (Olivia Colman) sits on the throne, while the country is at war with France. Suffering from health problems, Anne leaves the bulk of the actual ruling to her faithful adviser Sarah Churchill (Rachel Weisz), who makes all the important decisions and deals with politicians, such as opposition leader Robert Harley (Nicholas Hoult). One day, Sarah’s impoverished cousin Abigail Hill (Emma Stone) arrives at the palace looking for work and she eventually becomes Sarah’s lady-in-waiting. However, it isn’t long until Abigail begins trying to gain favour with Queen Anne, by any means necessary.

From director Yorgos Lanthimos (The Lobster, The Killing of a Sacred Deer) comes a dark comedy, inspired by the true story of two cousins competing to become court favourites of Queen Anne. As the film starts, Sarah is tasked with making decisions involving the current war with France, which includes a raise in taxes that is opposed by wealthy opposition leader Robert Harley. Through all of this, Abigail arrives at the palace and is initially assigned to be a maid by Sarah. However, after helping Sarah find a treatment for Queen Sarah’s gout, Sarah is quickly promoted to lady-in-waiting. It isn’t long until Abigail reveals herself to be a cunning opportunist, who is willing to do anything to replace Sarah as the Queen’s favourite.

It is probably safe to say that The Favourite is not likely a 100% historically accurate story of the triangle between Queen Anne, Abigail Hill, and Sarah Churchhill. However, that doesn’t stop the film from being a quite entertaining watch. Even though  she’s been active for nearly two decades now, it can be argued that The Favourite is the major breakthrough for Oliva Colman (Hot Fuzz, Tyrannosaur), who plays Queen Anne as a somewhat aloof, yet still quite layered character. The film also features what is possibly a career best performance by Emma Stone, who begins as a very innocent character falling face-first into the mud, before evolving over the course of the film into a more cunning and possibly even psychotic character.

The large bulk of The Favourite is centred on the dynamic and Colman, Stone and Rachel Weisz, whose character of Sarah stars off seeming cold and controlling, yet it becomes apparent that she is probably the one that truly cares about Queen Anne. The supporting cast includes a constantly wig-wearing Nicholas Hoult as opposition leader Robert Harley, who wants to use Abigail to find out Sarah and Queen Anne’s secrets. The cast is rounded out by Mark Gatiss as Sarah’s husband Lord Marlborough, James Smith as the duck-loving Prime Minister Sidney Godolphin, and Joe Alwyn as Samuel Masham, who develops an attraction towards Abigail.

Compared to his previous efforts, The Favourite is arguably one of the more accessible films directed by Yorgos Lanthimos. However, the film still has a dark edge to it, as the film comes off feeling like Barry Lyndon, except with a whole lot more psychotic behaviour and multiple fisheye-lensed shots.