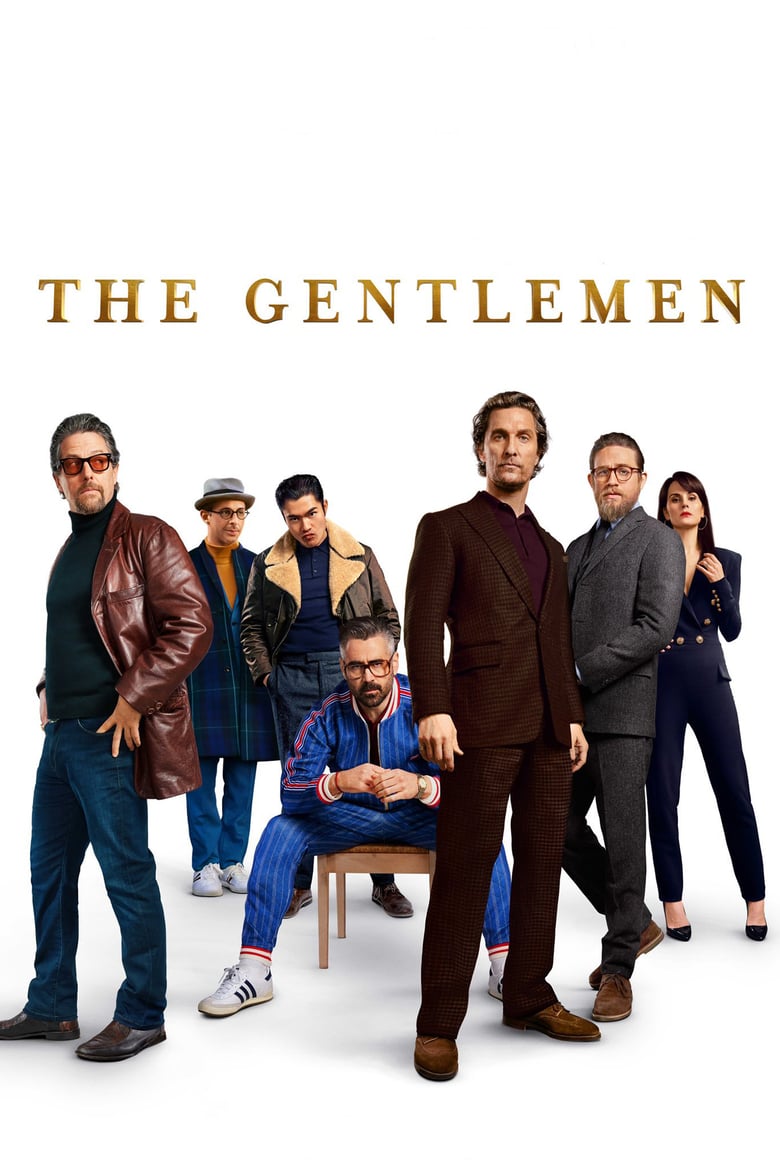 Guy Ritchie returns with his first gangster film in over a decade with The Gentlemen. One day Raymond (Charlie Hunnam) is visited by private investigator Fletcher (Hugh Grant), who details his plans to blackmail Raymond’s boss Mickey Pearson (Matthew McConaughey), an American immigrant, who has created a highly successful marijuana dealing operation in the UK. Mickey plans to sell his operation to American billionaire Matthew Berger (Jeremy Strong) and retire with his wife Rosalind (Michelle Dockery). However, these plans hit a snag through run-ins with Chinese gangster Dry Eye (Henry Golding) and an unexpected robbery of one of Mickey’s farms by thugs associated with Coach (Colin Farrell). All the while, the goings-on have been observed by Fletcher, who tells Raymond that Mickey has to pay £20 million or else Fletcher’s findings will be delivered to tabloid editor Big Dave (Eddie Marsan).

Twelve years after 2008’s RocknRolla, Guy Ritchie makes his return to the gangster film genre he got his start in, with films like 1998’s Lock, Stock, and Two Smoking Barrels and 2000’s Snatch. On paper, this would sound like a welcome return to for a director, whose output over the last decade or so involved his two Sherlock Holmes films in 2009 and 2011 respectively, the admittedly fun 2015 adaptation of The Man from U.N.C.L.E., the poorly received King Arthur: Legend of the Sword in 2017, and last year’s live-action remake of Alladin. However, it doesn’t take that long to realize that The Gentlemen isn’t being made by the same Guy Ritchie who got his start in the gangster film genre more than two decades ago.

The majority of the plot of The Gentlemen is told in flashback. as Fletcher details all the events to an increasingly annoyed Raymond. It is through Fletcher’s narrative that we meet the major players in this game, including Mickey Pearson, his wife Rosalind, and rival Dry Eye. At the centre of the plot is Mickey’s vast marijuana empire, which has prospective buyers in both Matthew Berger and Dry Eye. Then there is the outside player Coach, who inadvertently finds himself in the middle of this growing drug war, as the members of Coach’s boxing gym robs one of Mickey’s farms and posts a “fight porn” video of the job online.

It might be safe for me to say that The Gentlemen is the personification of whatever midlife crisis Guy Ritchie is currently going through. It really seems that Ritchie is desperate to revisit his glory days from two decades ago and it is quite evident throughout much of The Gentlemen that his trying too hard. This is particularly evident in Hugh Grant’s character of Fletcher, who is almost a caricature of the cockney gangsters that were present in Lock, Stock, Two Smoking Barrels and Snatch.

However, while The Gentlemen is far from Guy Ritchie’s best work, I wouldn’t exactly call the film a complete trainwreck either. The film features some individual scenes the hearken back to the Guy Ritchie of old, particularly through his trademark use of violence as comedy. I also have to add that Collin Farrell completely steals his scenes as reluctant gangster Coach and there’s a certain scene involving a pig that is completely hilarious in all the wrong ways.

Overall, I would have to say that those going into The Gentlemen expecting a return of the Guy Ritchie that directed Lock, Stock, and Two Smoking Barrels and Snatch and likely going to leave disappointed. However, the film still has some of his old charms and it’s worth checking out at some point.

The Gentlemen is Now Available