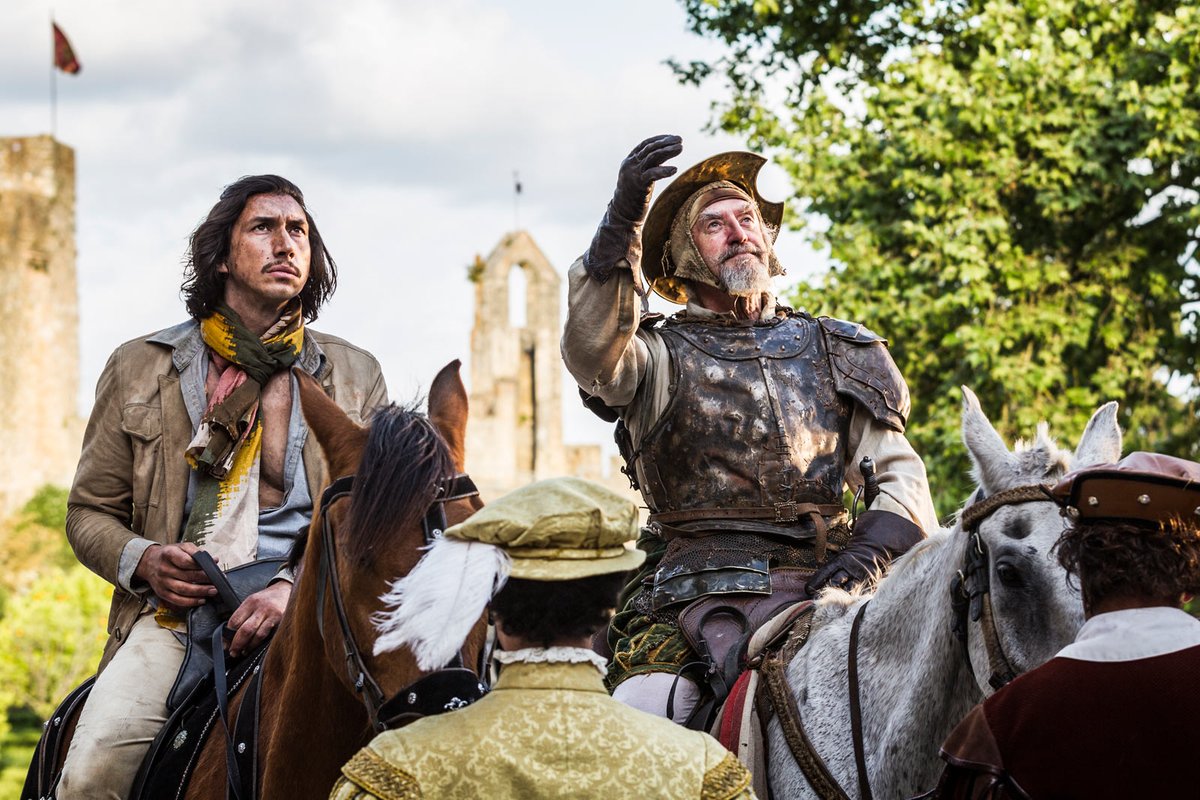 6.5
The Man Who Killed Don Quixote (2018) 2h 12min | Adventure, Comedy, Drama | 19 May 2018 (France)
Director: Terry GilliamWriters: Terry Gilliam, Tony GrisoniStars: José Luis Ferrer, Ismael Fritschi, Juan López-Tagle
Summary: Toby, a disillusioned film director, becomes pulled into a world of time-jumping fantasy when a Spanish cobbler believes him to be Sancho Panza. He gradually becomes unable to tell dreams from reality.
Countries: Spain, Belgium, France, UK, PortugalLanguages: English, Spanish
Source: imdb.comDisclaimer: This plugin has been coded to automatically quote data from imdb.com. Not available for any other purpose. All showing data have a link to imdb.com. The user is responsible for any other use or change codes.

Terry Gilliam finally brings his long-in-development passion project to the big screen with The Man Who Killed Don Quixote. Toby Grisoni (Adam Driver) is a washed up filmmaker, currently shooting commercials for an advertising agency run by The Boss (Stellan Skarsgård). Toby comes across a bootleg DVD of a film he made about Don Quixote ten years prior and he decides to takes a nostalgic trip to the Spanish village he shot the film. It is there where he discovers that Javier (Jonathan Pryce), the shoemaker Toby cast in the lead role, now believes that he is truly Don Quixote. Mistaken as Quixote’s trusted squire Sancho Panza, Toby ends up following Javier on a series of misadventures.

It was back in 1989 when Terry Gilliam first set out to write and direct a film loosely based on the 17th century novel “Don Quixote” by Miguel de Cervantes. The film nearly got made in 1998 with Jean Rochefort and Johnny Depp in the lead roles, though the production was plagued with a number of issues that have now become infamous. After nearly three decades of development, The Man Who Killed Don Quixote has finally seen the light of day, with Gilliam reuniting with Brazil star Jonathan Pryce as Quixote, joined by Adam Driver as Toby. The story, set in the modern day, heavily blurs the line between reality and fiction, as “Quixote” and Toby find themselves in a series of misadventures. This includes Toby avoiding the seductions of The Boss’ wife Jacqui (Olga Kurylenko), while reuniting with his old flame Angelica (Joana Ribeiro), who is now “owned” by the cruel oligarch Alexei Miiskin (Jordi Mollà).

Sometimes there are cases when the story of how a film got made is more interesting than the film itself. I would have to say that this is the case of The Man Who Killed Don Quixote, which had gained a reputation of being a somewhat cursed project for Terry Gilliam, with his failed attempt to getting the film made in 1998 being documented in the 2002 film Lost in La Mancha. Even after he finally finished the film, the problems continued for Gilliam, as rights issues made it unknown whether the film would actually get released.

Well, The Man Who Killed Don Quixote has finally seen the light of day and it’s…fine. If you are a fan of Terry Gilliam, the film fits right in place with the rest of his filmography, as the film takes a very unique approach to bringing the story of Don Quixote to the big screen. However, it’s probably best to go into the film with somewhat tempered expectations. For a film that has been in development on and off for three decades, I can’t really say that The Man Who Killed Don Quixote was fully worth the wait. If anything, this serves as a nice cap in the career of Terry Gilliam, who at 79 years old, probably doesn’t have too many more films in him.

The Man Who Killed Don Quixote screens on April 10, 2019 in select Cineplex Theatres.