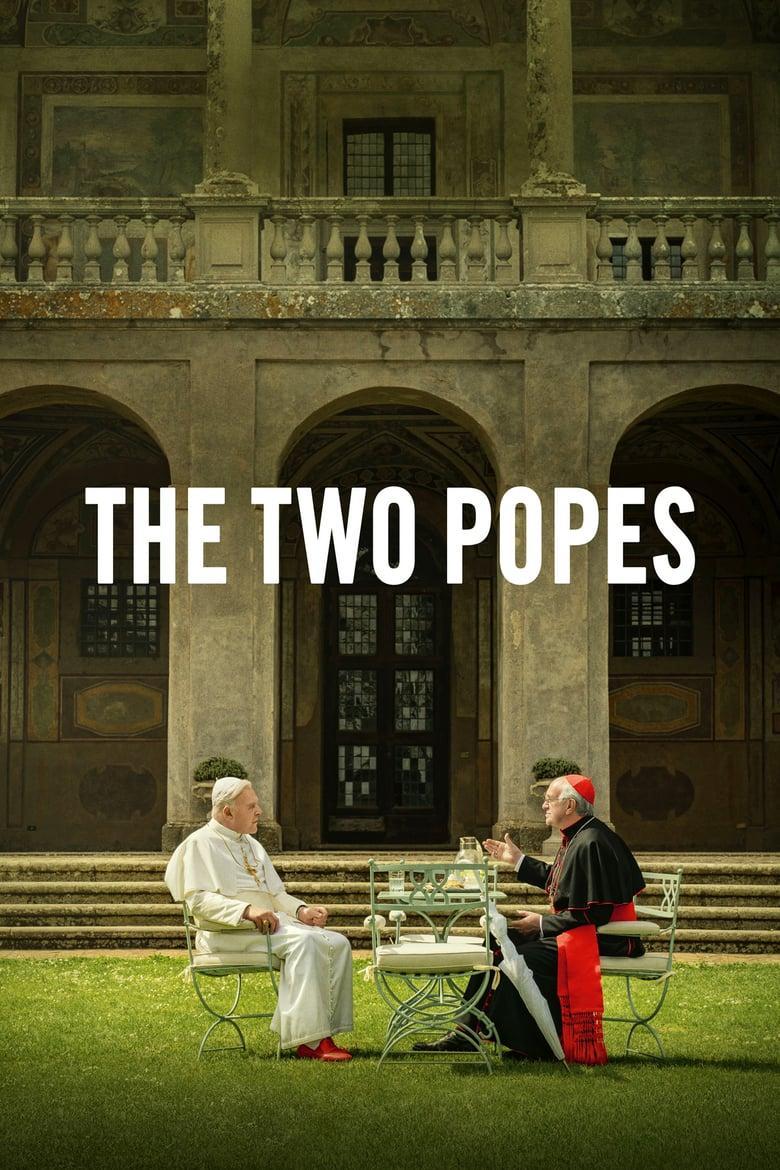 The contrasting ideologies between Pope Benedict XVI and his successor Pope Francis are examined in The Two Popes. Following the death of John Paul II in 2005, conservative German Cardinal Joseph Aloisius Ratzinger (Anthony Hopkins) is elected the new leader of the Catholic Church as Pope Benedict XVI. Fast forward to 2012 and the Catholic Church is in the midst of a cover-up scandal involving sexual abuse by priests. It is during this time when Argentian Cardinal Cardinal Jorge Mario Bergoglio (Jonathan Pryce), the future Pope Francis, visits Pope Benedict to express his desire to retire as a cardinal and return to being a simple parish priest. However, over the course of their multi-day discussion, Bergoglio learns that Benedict himself plans to resign the papacy, something that hasn’t occurred for hundreds of years.

The Two Popes is a biographical film from director Fernando Meirelles (City of God, The Constant Gardener), adapted by Anthony McCarten from his 2017 play The Pope. The film primarily consists of a lengthy meeting between the conservative Pope Benedict and more liberal and reformist Cardinal Bergoglio, as they debate the direction the Catholic Church has been heading. The Two Popes also features multiple flashbacks to a young Bergoglio (Juan Minujín) and the tough choices he had to make as a Jesuit priest in Buenos Aries, particularly during a period of dictatorship in the 1970s.

As a Catholic, I remember how big a deal it was when Pope Benedict XVI decided to resign from the papacy in 2013, something that hadn’t occurred for a least 700 years. Director Fernando Meirelles and writer Anthony McCarten wisely decide to steer clear of any possible ulterior motives of Pope Benedict resigning in the midst of a sexual abuse cover-up scandal and instead The Two Popes is more about Benedict sizing up Cardinal Bergoglio, the man who had almost beat him for the papacy in 2005. Repeatedly ignoring Bergoglio’s requests that Benedict signs his retirement papers, the two strike up an unlikely friendship over the course of their conversation in Rome.

The Two Popes is a film that is at is best when it just allows Anthony Hopkins and Jonathan Pryce to work off each other in the lengthy conversation that makes up the bulk of the film. However, being from South America himself, it seemed that Fernando Meirelles was interested in turning The Two Popes into a more fleshed out biopic for the future Pope Francis. However, the flashbacks featuring Juan Minujín as Jorge Mario Bergoglio in his younger days end up being the weakest element of the film, with me just wanting to get back between the banter between Hopkins and Pryce.

Overall, I will say that you don’t have to be a practicing Catholic to appreciate The Two Popes as a character study of two men debating their opposing ideologies.

The Two Popes is now playing