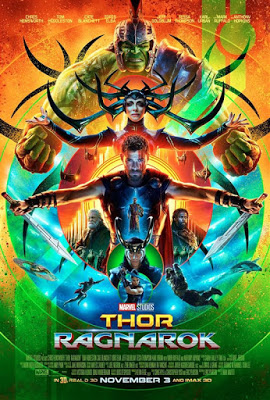 Thor tries to save Asgard from the Goddess of Death in Thor: Ragnarok. Thor (Chris Hemsworth) returns to Asgard after he has repeated nightmares about the prophesied apocalyptic event of Ragnarök. In his absence, Thor’s brother Loki (Tom Hiddleston) has ruled in the guise of their father Odin (Anthony Hopkins), a consequence of which is the freeing Thor’s sister Hela (Cate Blanchett), the Goddess of Death. Hela destroys Thor’s hammer and he and Loki are flung out into space and stranded on the isolated planet of Sakaar.

On Sakaar, Thor is captured by a scavenger named
Valkyrie (Tessa Thompson) and sold to The Grandmaster (Jeff Goldblum), who places Thor in a gladiator match, against none other than The Incredible Hulk (Mark Ruffalo). With Hela reigning chaos on Asgard, Thor must find a way to return and prevent the destruction of his home.

New Zealand director Taika Waititi (What We Do in the Shadows, Hunt for the Wilderpeople) takes the helm for the third solo adventure for Thor, the God of Thunder. This time around, Thor is joined by The Incredible Hulk, who somehow found himself stranded on the planet of Sakaar following the events of Avengers: Age of Ultron and has become the champion of The Grandmaster’s gladiator games. Meanwhile, back in Asgard, Hela has taken control of Asgard, assigning Asgardian warrior Skurge (Karl Urban) as her executioner, with Asgardian sentry Heimdall (Idris Elba) building a resistance on the outskirts.

Thor: Ragnarok is not an easy film for me to describe. On one hand, the film can be seen as more of the same Norse mythology based superhero action as the previous two films. On the other hand, the film is also a trippy and weird science fiction adventure, particularly involving the scenes on Sakaar. One thing that I can say for sure is that Thor: Ragnarok is quite all over the place, swapping between both the Asgard and Sakaar storylines and even featuring a brief appearance in the first act by Doctor Stephen Strange (Benedict Cumberbatch).

With Taika Waititi directing, Thor: Ragnarok has a much more of a comedic tone than the previous films. In fact, Waititi himself has a comedic supporting role in the form of a softspoken CGI rock monster named Korg, who is one of the standout characters in the film. The film also features a welcome return for Tom Hiddleston’s Loki, who is firmly established as an antihero more concerned about his own well-being. Then there is Jeff Goldblum as the very passive aggressive villain The Grandmaster, who is much more interesting to watch than Cate Blanchett’s scowling Hela.

I can probably say that Thor: Ragnarok is a better film than the previous entry Thor: The Dark World, though despite an element of sci-fi weirdness, the film isn’t particularly all that memorable.