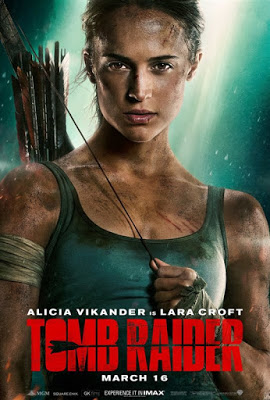 Alicia Vikander stars as Lara Croft in this new adaptation of the long-running video game series in Tomb Raider. It has been seven years since Lord Richard Croft (Dominic West) disappeared without a trace. His daughter Lara (Vikander) discovers that her father had a secret hobby as an archaeologist and that he disappeared while searching for the lost tomb of mythical Japanese Queen Himiko. With the help of ship captain Lu Ren (Daniel Wu), Lara retraces her father’s footsteps to an uncharted island off the coast of Japan, where she finds a group of mercenaries lead by Mathias Vogel (Walton Goggins), who is also looking for the tomb for a shadowy organization known as Trinity.

It has been 15 years since the last film based on the now two decade old Tomb Raider video game series. In this new reboot, loosely based on the story of the 2013 video game, Alicia Vikander takes over from Angelina Jolie as Lara Croft. This new casting reflects the evolution of the character in the video games into a more gritty and realistic character. In fact, it can probably be argued that this new film adaptation of Tomb Raider is taking things a whole lot more seriously than the original film adaptations from 2001 and 2003. At the very least, Swedish actress Alicia Vikander is probably more believable as a British archaeologist than Angelina Jolie ever was.

While this new film adaptation of Tomb Raider is undoubtedly the best of the three, it still comes off as little more than “Indiana Jones lite.” Walton Goggins’ antagonist of Mathias Vogel is a pretty two dimensional villain, who is really only there to provide Lara Croft with some conflict. At the same time, the film is planting seeds for a franchise by referencing a shadowy organization known as Trinity, who want these ancient artifacts for nefarious means.

The actually “tomb raiding” of Tomb Raider doesn’t really happen until the third act and pretty much comes off as the characters literally acting out puzzles found in the video game. While it is a major cliche at this point saying that video games don’t translate well to movies, I do have to content that it would probably be more fun to play Tomb Raider, than watch it.

While I’m not exactly holding my breath for any future Tomb Raider films with Alicia Vikander, this film is without a doubt the best one in the series, though still nothing to sing home about.