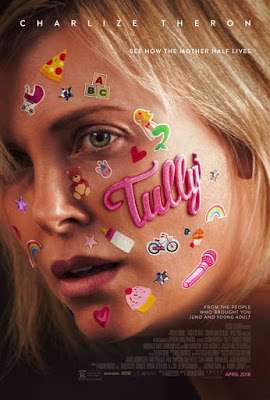 A stressed out mother of three hires a night nanny in Tully. Marlo (Charlize Theron) is a woman on the verge of giving birth to her third child, who already has a stressful time raising two kids with her husband Drew (Ron Livingston), particularly her son Jonah (Asher Miles Fallica), who is possibly autistic. At the urging of her rich brother Craig (Mark Duplass), Marlo hires a “night nanny” named Tully (Mackenzie Davis) to help with care for Marlo’s newborn daughter. However, it soon comes to pass that Tully is taking care of Marlo, just as much as the baby.

With Tully, director Jason Reitman reunites for the third time with Oscar winning screenwriter Diablo Cody, following their previous two collaborations on 2007’s Juno and 2011’s Young Adult, with the latter’s star Charlize Theron also making her return. Continuing the thematic progression of the three movies, Tully is a film that focuses on the stresses that come with both middle age and motherhood. Marlo is a woman on the brink, as she has to struggle with raising three children, while her husaband Drew goes on business trips and plays video games in the middle of the night. However, the arrival of Tully turns out to be a blessing for Marlo, with the two forming a very unique bond with each other.

After taking a four year hiatus following the back-to-back releases of 2013’s Labor Day and 2014’s Men, Women, & Children, Jason Reitman reunites with the collaborator he has seen the most success with in Diablo Coby. It can be argued that Tully completes a de facto trilogy of films that tackle growing up at three different times in a woman’s life. Charlize Theron isn’t afraid be completely unglamorous in her lead role of Marlo, who is sporting much baby fat and is often on the very brink of exhaustion, as she watched late night reality TV. On the flipside, Tully is a major free spirit and is incredibly caring to both Marlo and her newborn daughter.

There is a good chance that Tully can be a breakthrough role for actress Mackenzie Davis, who is probably most recognizable for supporting roles in films such as The F Word, The Martian, and Blade Runner 2049. While it can be easy to write off the character of Tully as a “Manic Pixie Dream Nanny,” how it becomes apparent that there is much more to her character than meets the eye.