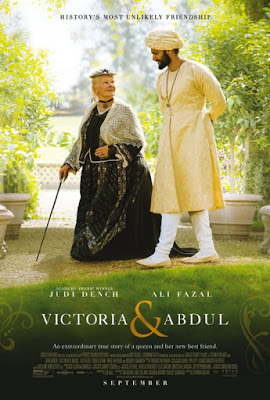 Queen Victoria begins an unlikely friendship with her Indian servant in Victoria and Abdul. 29 years into the British rule of India, Indian clerk Abdul Karim (Ali Fazal) is sent along with his friend Mohammed (Adeel Akhtar) to present a mughal coin to Queen Victoria (Judi Dench). Victoria takes a fancy to Abdul and ask that he be made on her personal servants, eventually calling him her munshi or spiritual leader. However, Victoria’s growing friendship with Abdul confuses and annoys the Queen’s staff and family, particularly her son Bertie (Eddie Izzard).

From director Stephen Frears (The Queen, Philomena) comes a story from the latter years of Queen Victoria’s reign, as she began an unlikely relationship with her Indian servant Abdul Karim, who also game to be known as The Munshi. Arriving in Great Britain to make a presentation to The Queen, Abdul quickly strikes Victoria’s fancy and becomes one of her closest confidants. However, Queen Victoria’s close relationship with a Muslim Indian servant is not looked upon in a kind light from those in Victoria’s company, including Sir Henry Ponsonby (Tim Pigott-Smith), Lady Churchill (Olivia Williams), and Prime Minister Lord Salisbury (Michael Gambon). Particularly annoyed by Queen Victoria’s friendship with Abdul is her son Bertie, particularly since Victoria seems to give more attention to Abdul.

Probably one of the most notable facts about Victoria and Abdul is that the film mark’s Judi Dench’s return to the role of Queen Victoria, after previously playing the monarch twenty years ago in the 1997 film Mrs. Brown. Stephen Frears takes an almost comic approach in telling the little-known story of Queen Victoria’s relationship with Abdul Karim during the final years of her reign. Victoria’s fascination with Abdul is met with bemusement by those around her, leading to some very awkward moments.

However, behind the comedy of Victoria and Abdul is a commentary about the very racist view of the Indian people by the British in the late 19th/early 20th century. At the time this story is being told, India has been colonized by the British for three decades and it would be many more decades after Queen Victoria’s death when the country finally regained independence. Even though Abdul repeatedly states that he is proud to serve the British, it is quite obvious throughout the film that everyone except Queen Victoria views him as little more than a second class citizen. Even Abdul’s friend Mohammed, who hates the cold weather in Britain, dislikes that Abdul is delaying their quick return to India.

While Victoria and Abdul could have tackled the more serious themes of the film a little more deeply, it is still a relatively charming film.