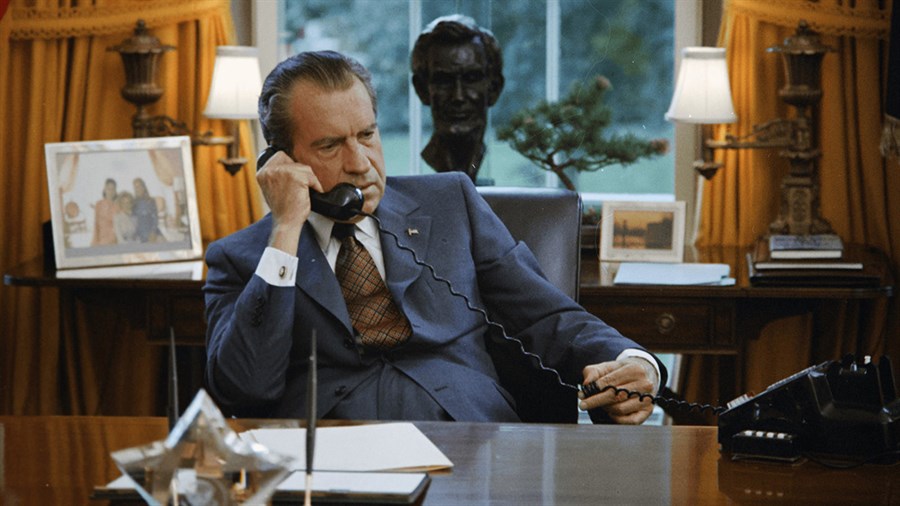 The events leading up to the resignation of US President Richard Nixon is told in detail in Watergate. In 1972, five men broke into the Democratic National Committee headquarters at the Watergate office complex. This would soon erupt into a scandal, as a cover-up by the administration of Richard Nixon is exposed. Using transcripts of 3400 hours of conversations secretly recorded by Nixon in the oval office, the events leading involving the Watergate cover-up are depicted in a series of re-enactments. These recreations are supported by archival footage and interviews with those who witnessed the events, including CBS anchor Dan Rather, former White House counsel John Dean, and journalist Carl Bernstein.

Watergate is a two-part documentary about the Watergate scandal, directed by Charles Ferguson (Inside Job). At a combined running time of 4h 20m, Watergate goes into extreme detail in revisiting the events that eventually lead to the resignation of President Richard Nixon. Part 1 covers the events leading the Watergate burglary and subsequent cover-up, while Part 2 focuses primarily on the investigation, which would lead to Nixon’s resignation to avoid impeachment. The film makes use of transcripts from the infamous “Watergate Tapes” to provide a basis for a series of re-enactments, which illustrate Nixon’s direct involvement in the Watergate burglary and cover-up.

The question that has to be asked watching Watergate is whether this documentary truly needed to be 4+ hours. To me, it seems that much of this running time was the result of the re-enactments that dominate much of part one. I’m certain Charles Ferguson could have cut the film down to a more manageable length, even though I do admit that I was never bored watching the events of Watergate play out.

Nearly 50 years after the events, it is hard not to watch Watergate and not notice the parallels between the Nixon administration and the current administration of Donald Trump. Thanks to a pardon by his successor Gerald Ford, Richard Nixon was never held accountable for his role in the Watergate Scandal, which creates the unhealthy belief that the President of the United States is above the law. If anything, Watergate should be viewed as a cautionary tale about what happens when the President abuses his power and hopefully, history will not end up repeating itself.

Despite the epic length, I will still consider Watergate to be the definitive depiction of these events, which still hold great importance in today’s political climate.