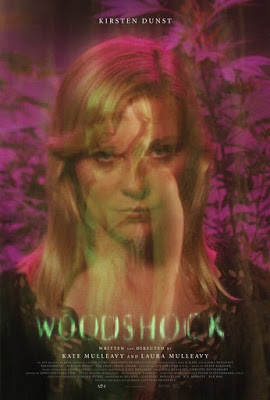 A woman deals with immense grief in Woodshock. Theresa (Kirsten Dunst) is a woman who works at a marijuana dispensary run by Kieth (Pilou Asbæk). Theresa is experiencing extreme grief and depression following the recent death of her mother, which is affecting her relationship with her boyfriend Nick (Joe Cole). After Theresa makes a tragic mistake, she self-medicates with a very potent form of cannabis, which has reality-altering effects.

Woodshock is the directorial debut of fashion designers Kate and Laura Mulleavy. The film is a tale of grief and depression, as the protagonist Theresa tries to cope with the recent death of her mother. The film heavily hints that Theresa’s mother was euthanized, so there is an added layer of guilt to Theresa’s grief. This grief is compounded when Theresa makes a horrible mistake at the marijuana dispensary where she works, which results in her taking a very powerful form of the drug, which heavily distorts Theresa’s sense of reality.

Perhaps it was the casting of Kirsten Dunst in the lead role, but I noticed many similarities between Woodshock and Lars von Trier’s Melancholia. Both are films in which the protagonist is dealing with a heavy depression, though I have to say that Woodshock is nowhere near as compelling as Melancholia. For much of the running time, Woodshock is a slow and depressing slog of a film, with the occasional fantastical drug trip of Theresa running (and floating) through the woods. Kate and Laura Mulleavy show their lack of filmmaking experience with this sequences, which look like they could be from a commercial for the fashion products the siblings manufacture.

Most of the heavy lifting in Woodshock is done by Kirsten Dunst, who has to perform in many scenes of the film without any dialogue. However, the film also has a notable supporting performance in the film by Danish actor Pilou Asbæk (Ghost in the Shell) as Theresa’s boss Keith. The rest of the characters in the film are merely just there, including Joe Cole as Theresa’s live-in boyfriend Nick, who really only turns up to show concern for Theresa’s slow mental breakdown. Then the film decides to end on a very extreme note, which was very out of place with how the rest of the film was portrayed.

Altogether, while it may be unfair to criticize first-time filmmakers for their fashion designer background, but I do have to say that Kate and Laura Mulleavy’s inexperience really shows in Woodshock, which is a quite mediocre attempt to recreate Melancholia for the stoner art house crowd.