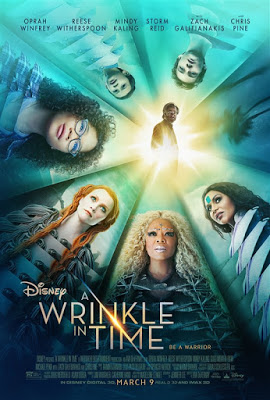 A girl is sent on a quest to rescue her father in A Wrinkle in Time. It has been four years since Meg Murry’s (Storm Reid) astrophysicist father (Chris Pine) disappeared without a trace. One day, Meg, her younger brother Charles Wallace (Deric McCabe), and friend Calvin (Levi Miller) meet the astral travelers Mrs. Whatsit (Reese Witherspoon), Mrs. Who (Mindy Kaling), and Mrs. Which (Oprah Winfrey). It turns out that Meg’s father’s theories about a tesseract that can wrinkle time and space were true and that he is trapped at the other side of the universe, held captive by a dark force known as The It. Meg and her friends are sent on her father’s trail to combat this darkness.

Ava DuVernay (Selma) directs this new big screen adaptation of the Newbery Medal award winning 1962 novel by Madeleine L’Engle. This is the second Disney-produced adaptation of the story, following a made-for-TV film back in 2003. The story of A Wrinkle in Time combines elements of science fiction and fantasy, as the protagonist of Meg Murry goes on a journey to locate her missing father. She is joined by her highly intelligent adopted brother Charles Wallace, classmate Calvin, and the eccentric Three Mrs. Along the way, the encounter individuals such as the Happy Medium (Zach Galifianakis) and The Man with Red Eyes (Michael Peña).

Madeleine L’Engle’s novel for A Wrinkle in Time is a young adult classic that many people have either read on their own or as part of school curriculum. Indeed, I remember reading the book as a kid more than two decades ago and getting quite terrified at the dark places that story went in the latter half. It is because of this nostalgic connection that I really wanted to like Ava DuVernay’s adaptation of the story. However, just like the 2014 adaptation of The Giver, another film based on a book I read as a child, A Wrinkle in Time doesn’t really translate all that well to the big screen.

While I can excuse some of the changes made to the source material, it does seem like this film is more focused on CGI visuals and celebrity stunt casting. It does say a lot that Oprah Winfrey, Reese Witherspoon, and Mindy Kaling get top billing in the film, even though the Three Mrs are merely supporting characters. While relative newcomer Storm Reed does hold her own among her more famous co-stars, she eventually gets lost under all the special effects.

It is undoubtedly a very positive thing that a black female filmmaker in Ava DuVernay got to make a big budget blockbuster with a multiracial cast. However, that sadly didn’t make A Wrinkle in Time any less than an underwhelming experience, as one of the all-time classic young adult novels gets turned into a film that is less than memorable.