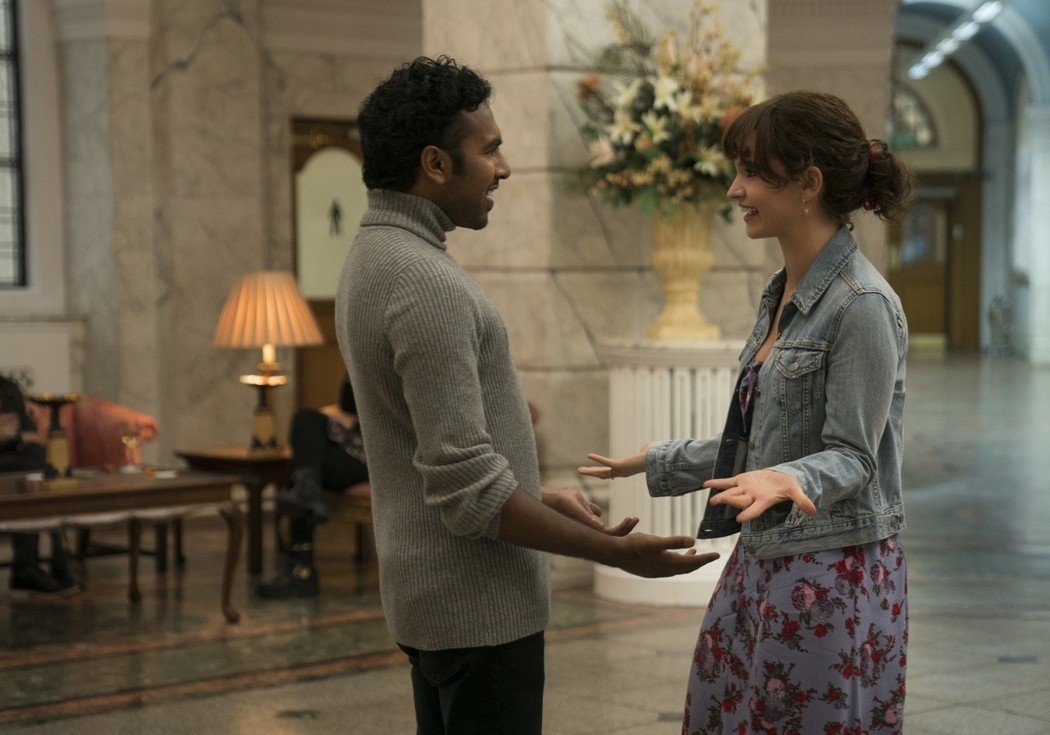 6.5
Yesterday (2019) 1h 56min | Comedy, Fantasy, Music | 28 June 2019 (USA)
Director: Danny BoyleWriters: Jack Barth, Richard CurtisStars: Himesh Patel, Lily James, Sophia Di Martino
Summary: A struggling musician realizes he's the only person on Earth who can remember The Beatles after waking up in an alternate timeline where they never existed.
Countries: UKLanguages: English
Source: imdb.comDisclaimer: This plugin has been coded to automatically quote data from imdb.com. Not available for any other purpose. All showing data have a link to imdb.com. The user is responsible for any other use or change codes.

An aspiring musician wakes up into a world that has never heard of The Beatles in Yesterday. Jack Malik (Himesh Patel) is a struggling singer from the town of Clacton-on-Sea in the UK, who is ready to give up on his musical ambitions, despite the neverending support of his childhood friend and manager Ellie Appleton (Lily James). While riding his bike home, Jack is struck by a truck the exact moment a solar flare causes a 12-second global blackout. When he comes to, Jack is shocked to find out that there are now many differences in the world, particularly in how nobody has heard of The Beatles. Jack decides to take advantage of this fact and perform the band’s songs as his own, which attracts the attention of musician Ed Sheeran and steel-hearted agent Debra Hammer (Kate McKinnon).

Danny Boyle (Trainspotting, Slumdog Millionaire) directs this musical fantasy about a young musician, who somehow finds himself in an alternate reality, where the world has never heard of The Beatles. Jack Malik decides to take advantage of this fact and play The Beatles’ songs as his own, which quickly results in him rising to super-stardom. However, Jack soon begins to feel guilt about passing off the songs as his own, especially as his very controlling agent Debra Hammer begins to control a lot of the creative process. Jack also feels regret about leaving Ellie back home, since she was the one who initially supported his career every step of the way.

Yesterday serves to answer the dual questions of what the world would be like without The Beatles and what would happen if The Beatles came out today? Indeed, some of the most cringe-worthy, yet funny moments of the film comes from Jack’s interactions with Debra Hammer, as well as the record company’s marketing departments, who seem more interested in creating a sellable image for Jack, rather than view these legendary songs by their own merit. The film also features a bit of a romantic comedy element, as Jack struggles with his feelings for Ellie, as his growing stardom threatens to drive them apart.

It says a lot that Danny Boyle’s current ambitions that he abandoned the director’s seat for the next James Bond movie and instead decided to direct a low-key musical fantasy, featuring the music of The Beatles. Yesterday is arguably the most low-key film Boyle has directed since Millions in 2004 and the end result is a relatively enjoyable feel-good viewing experience. Yesterday will probably be a star-making vehicle for English-Indian Himesh Patel, who has previously been best known for his role on the BBC soap opera EastEnders. Lily James is quite charming as Ellie, while Ed Sheeran plays a somewhat satirical version of himself. However, the true scene-stealing moments of the film go to Kate McKinnon, who is perfectly cast as Jack’s slimy agent. I will also note that Yesterday features an uncredited cameo by a Danny Boyle regular, though I won’t spoil who he is playing.

Overall, I will say that Yesterday is a very feel-good and crowd pleasing musical fantasy.