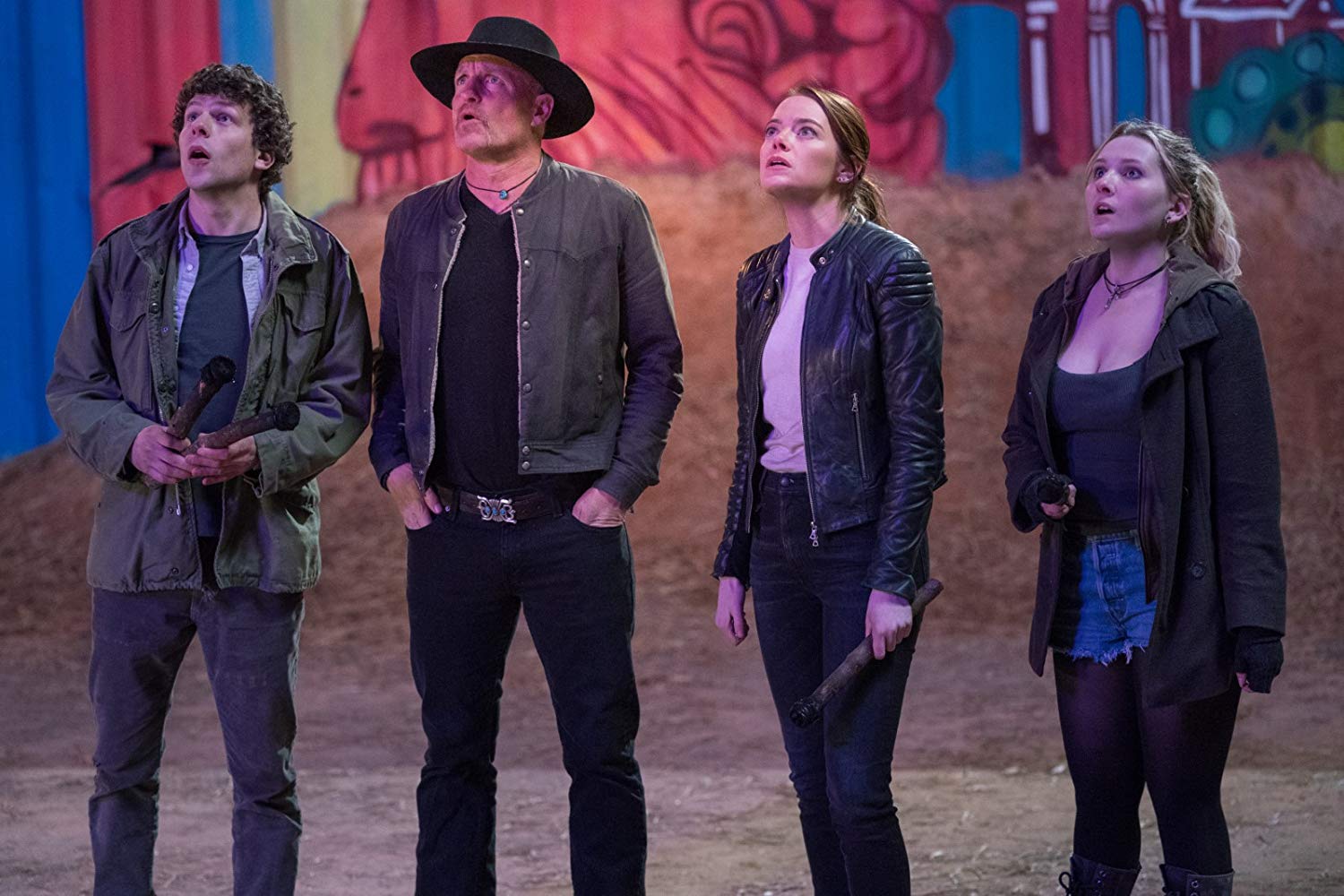 7.3
Zombieland: Double Tap (2019) 1h 39min | Action, Comedy, Horror | 18 October 2019 (USA)
Director: Ruben FleischerWriters: Dave Callaham, Rhett ReeseStars: Zoey Deutch, Abigail Breslin, Emma Stone
Summary: Columbus, Tallahassee, Wichita, and Little Rock move to the American heartland as they face off against evolved zombies, fellow survivors, and the growing pains of the snarky makeshift family.
Countries: USALanguages: English
Source: imdb.comDisclaimer: This plugin has been coded to automatically quote data from imdb.com. Not available for any other purpose. All showing data have a link to imdb.com. The user is responsible for any other use or change codes.

We catch up to the ragtag group of survivors a decade later in Zombieland: Double Tap. Columbus (Jesse Eisenberg), Tallahassee (Woody Harrelson), Wichita (Emma Stone), and Little Rock (Abigail Breslin) have spent ten years surviving together in the zombie-infested United States. However, when Columbus proposes to Wichita, she runs off with Little Rock, who in turn runs off with pacifist musician Berkeley (Avan Jogia). Wichita returns to find the Columbus has rebounded with the ditsy and absent-minded survivor Madison (Zoey Deutch). Together the four go off to find Little Rock and come to discover a new evolved breed of zombie that is incredibly difficult to kill.

Arriving nearly exactly ten years after the previous film, Zombieland: Double Tap returns us to the post-apocalyptic United States and the group of survivors that have become a ragtag family over the course of the last decade. However, tensions build as the now-grown Little Rock wants to leave the nest and Wichita has some commitment issues with Columbus. After Little Rock runs off to join Berkley at a pacifist commune called Babylon, the rest of the group, along with newcomer Madison, follows her trail. Along the way, they meet fellow survivors Nevada (Rosario Dawson), Albuquerque (Luke Wilson), and Flagstaff (Thomas Middleditch), the latter two of whom sport a striking resemblance to Tallahassee and Columbus.

It has taken a full decade to get the whole cast back together and create a sequel to 2009’s hit zombie-comedy Zombieland. In typical sequel fashion, everything in the film is made bigger. This includes both the introduction of new characters, as well as a new breed of “super zombie,” nicknamed the T-800 by Columbus, for the fact that they are hard to kill like the Terminator. Some the added elements work, particularly the scene-stealing performance by Zoey Deutch going full “dumb blonde” as Madison. However, other additions are one-trick ponies, such as the doppelganger characters played by Luke Wilson and Thomas Middleditch. Zombieland: Double Tap also sees the return of some of the gags from the original, which includes Columbus’ many survival rules, complete with on-screen text, and the occasional cutaway to a candidate for “Zombie Kill of the Year.”

Despite falling into some of the typical sequel traps, I will still say that Zombieland: Double Tap is still just as enjoyable zombie comedy as the first film. Also, if you stay during the credits, you’ll see a reprise of a certain famous person’s cameo.