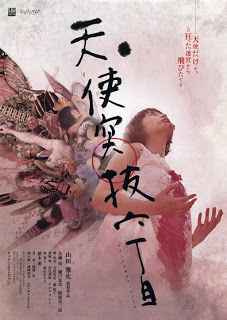 This is one odd film….

That line pretty much sums up the film Tentsuki in a nutshell.  The film can be described a drama with kooky comedic characters and just a dash of J-horror violence.

The film focuses on the character of Noboru and his interactions with a variety of odd characters, including his fossil-loving supervisor, a girl named Miruki who believes she is growing wings, and the strange woman who is waiting for her dead husband.

The film is weird from the start and only gets weirder as the film goes on (you know things have gone totally bananas when you see a giant cucumber for no apparent reason).  However, at the same time, the film also gets quite a bit darker, with a few violent scenes.

Overall, Tentsuki was a very odd film, but I still kind of liked it.