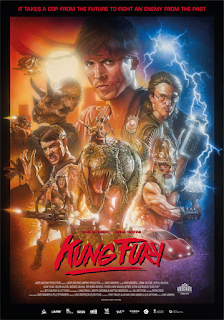 A kung-fu fighting cop goes against Hitler in the 1980s homage Kung Fury.  Kung Fury (David Sandberg) is a cop in 1985 Miami, who gained mystical kung-fu powers, which allows him to fight crime all over the city.  When Adolf Hitler (Jorma Taccone), a.k.a. Kung Führer, travels through time to spread terror, Kung Fury decides to travel back to Nazi Germany to stop him. However, he goes a little too far back.


Kung Fury is 30 minute short, which is a homage to all things 1980s.  An example would be the film’s opening fight scene, against an evil robot arcade machine, which simulates bad VHS tracking, which causes the fight to skip ahead to many humorous locales.  Kung Fury actually manages to squeeze a lot into its half hour runtime, featuring references of everything from 1980s cop films to Knight Rider (complete with David Hasselhoff cameo) to even an animated G.I. JOE-like scene.

Despite its relatively short runtime, Kung Fury is very enjoyable to watch and I would conclude by saying that it’s a half hour of 80s homage awesomeness.

Kung Fury is now available to watch for free on YouTube