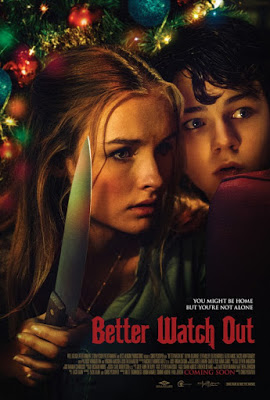 A babysitter defends a 12 year old boy from home invaders in Better Watch Out. In a quiet suburb during the holidays, Ashley (Olivia DeJonge) arrives to babysit 12 year old Luke (Levi Miller) while his parents (Patrick Warburton and Virginia Madsen) go out for the night. As the two settle down to watch scary movies, eat pizza, and sneak alcohol, Ashley and Luke find themselves terrorized by a home invader. However, something doesn’t seem right to Ashley and she will soon learn that this is no ordinary home invasion.

Better Watch Out initially seems like it is going to be a typical holiday-set horror film, in the vein of Black Christmas, complete with Ashley receiving mysterious phone calls. However, writer/director Chris Peckover and his co-writer Zack Kahn opted to add a major swerve at the end of the first act, which turns Better Watch Out into completely different type of horror film. I have to reveal this plot twist in order to properly talk about the film, so please DO NOT proceed any further if you do not want to know what this plot swerve is.

As it turns out, the Christmas home invasion was concocted by Luke with the help of his best friend Garrett (Ed Oxenbould) as part of an extravagant plan to get the much older Ashley to fall in love with Luke. It turns out that Luke is a budding sociopath and he doesn’t take Ashley’s rejection of his advances kindly and she ends up being pushed down the stairs and tied to a chair. Part of Luke’s plan to try and win Ashley over is to get rid of both her boyfriend Ricky (Aleks Mikic) and ex Jeremy (Dacre Montgomery), both of whom had mistreated her.

Probably one the main selling points of Better Watch Out is that the film is positioned as a horror version of Home Alone. Indeed, one of the goriest moments in the film involves what would really happen to someone if hit with a paint can swung from a banister. While the antics of Macaulay Culkin back in 1990 were played up for laughs, there is something deeply disturbing about Levi Miller’s performance as Luke. Perhaps it is just the thought that a 12 year old can be capable of such cruel acts. It’s almost as if Chris Peckover took inspiration of Macaulay Culkin’s more sinister performance in 1993’s The Good Son.

I am not sure if Better Watch Out is a film that I would rush out to recommend. The film shows its full deck only a half hour into the film and then it’s just a waiting game to see how things will turn out. If director Chris Peckover played a bit more with the home invasion set-up, there might have been more to this film.