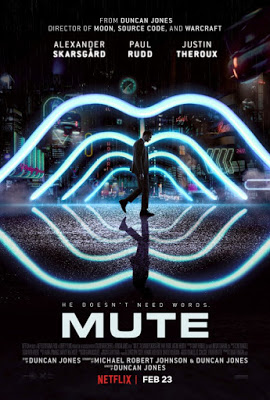 A bartender who cannot speak tracks down his girlfriend in the underworld of Berlin in Mute. Leo (Alexander Skarsgård) is a man who lost the ability to speak after a childhood accident. Leo works as a bartender at the bar, along with his waitress girlfriend Naadirah (Seyneb Saleh). One night, Naadirah mysteriously disappears without a trace and a concerned Leo tries to track her down in the underworld of a futuristic Berlin. During his search, Leo crosses paths with American surgeon Cactus Bill (Paul Rudd), and his friend Duck (Justin Theroux), who is is looking to secure passage for himself and his daughter back to the United States.

After taking a detour with Warcraft, Duncan Jones has returned with the sci-fi/noir film Mute, which is a film that he has been developing for well over a decade. Mute has always been described by Jones as a spiritual sequel to his excellent 2009 debut Moon, though the connection turns out to be little more than a brief cameo showing that Mute is taking place in the same universe.

In fact, Mute is almost the opposite of the very intimate and isolated Moon, with the film taking heavy inspiration from Ridley Scott’s Blade Runner. The story of the film is built around a silent performance by Alexander Skarsgård as Leo, who is the de facto gumshoe of this noir-like mystery that has Leo searching for his missing girlfriend Naadirah. Leo’s only leads are the interactions Naadirah made on the final night he saw her, as well as cryptic messages that show up on the phone that she gifted him. However, a common element arises as Leo keeps crossing paths with unhinged American surgeon, turned henchman Cactus Bill, who is desperate to leave Berlin as soon as possible.

Previous known only as the son of David Bowie, who this film dedicated to, Duncan Jones really hit it out of the park with his debut Moon, which was quickly followed up by 2011’s equally well-done Source Code. Jone’s career then took a bit a divergence when he was brought on to direct the, better than it should have been, adaptation of the video game Warcraft. In regard, Mute should be viewed as a return to form for Duncan Jones, especially since it is a story that he was trying to get made even before Moon. However, even though the end result is a pretty solid film, Mute is not without some major issues.

Mute is at its best when it follows Leo’s silent search for Naadirah, which leads him to a number of sleazy underworld locations. However, then there are the scenes between the hotheaded Cactus Bill and the possibly perverted Duck, which seem like they are part of a completely different film. Part of this comes from how both Paul Rudd, sporting a might mustache, and Justin Theroux seem somewhat miscast in their roles. In fact, it isn’t until quite late when their role in the film as a whole becomes more apparent.

I wouldn’t exactly say that Mute is a misstep for Duncan Jones, but for a film that has been in development hell for so long, it is a shame that the final product wasn’t at the quality that it could’ve been.