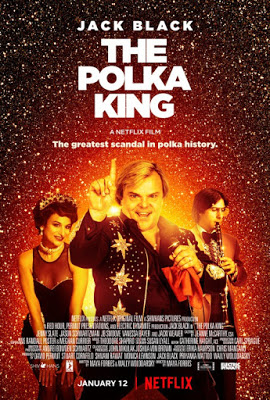 A popular polka musician gets rich through a Ponzi scheme in The Polka King. Jan Lewan (Jack Black) is a Polish immigrant, who has become one of the most popular polka players in Pennsylvania. Jan is married to former beauty queen Marla (Jenny Slate) and is best friends with his band’s clarinetist Mickey (Jason Schwartzman). In order to support his side businesses, such as his Polish gift shop, Jan accepts investments from his mostly elderly fans. This develops over the years into a large scale Ponzi scheme, which nobody suspects, except for Jan’s mother-in-law Barb (Jacki Weaver).

The Polka King is a comedic biopic about disgraced polka player Jan Lewan, whose story was previously told in the 2009 documentary The Man Who Would Be Polka King by Joshua Brown and John Mikulak. Director Maya Forbes adapts the documentary into a fictionalized telling of Jan Lewan’s schemes, with Jack Black playing the polka player. Jan Lewan’s Ponzi scheme nearly comes to a premature end when SEC officer Ron Edwards (JB Smooth) catches wind of Jan’s activities and gives him a warning. However, Jan’s investors, expecting a large return, keep giving him money, which results in the Ponzi scheme growing to astronomical proportions.

The question that you should ask when watching The Polka King is whether or not it is worth to watch a fictionalized version of this story when a documentary about the events already exists. I will say that Jack Black was probably the perfect choice to play Jan Lewan, since an eccentric polka player is right up Black’s alley. The Polka King can almost be described as a mix of the true crime comedy of Bernie with the scheming of Wolf of Wall Street. Costars Jenny Slate and Jason Schwartzman sort of take a backseat to Jack Black’s eccentricities, though Jacki Weaver is quite venomous as Jan’s untrusting mother-in-law, who seems to be the only one who suspects that there is something shady about the way Jan does his business. Even though The Polka King does run at a relatively brisk 90 minute run time, the film probably could have ended a little sooner than it does.

At the end of the day, The Polka King probably isn’t a necessary watch, but it is a good way to spend and hour and a half. Jack Black does give it his all with his depiction of Jan Lewan and even though you can probably just seek out the documentary, this is a film that is still worth checking out.