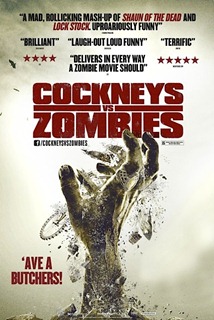 If you take the London crime comedies of Guy Ritchie and mix them with Shaun of the Dead, then you will have a pretty good idea about what Cockneys vs Zombies is about.  The film focuses on East London brothers Andy and Terry, who have decided to rob a bank in order to save the retirement home of their grandfather Ray (played by Snatch’s Alan Ford).  However, the robbery becomes the least of their worries after the East End of London becomes invaded by a swarm of zombies (the source of which is one of the most unique I’ve seen). I cannot begin to describe how fun and enjoyable a film Cockneys vs Zombies is.  I found it quite funny how the characters just react to the the zombie swarm as if it was “just another day in the east end.”  There’s a lot of self-referential humour in the film, in which everybody already knows to shoot zombies in the head and there’s mild confusion about why they aren’t moving fast (small reference to 28 Days Later).  Much of the action of the film is split between Andy, Terry and friends hiding out in a warehouse and Ray trying to hold off the zombie at his nursing home.  There is definitely some funny old people jokes within the film, the most funny of which being an old man on a walker just barely outrunning the zombies. The most fun aspect of any zombie film are the kills and Cockneys vs Zombies has some of the most unique and hilarious zombie kills that you will ever see on film.  There is also quite a lot of British humour, such as zombie soccer hooligans, who would rather fight each other, and even a double decker bus.  It’s also quite funny how everyone at Ray’s nursing home seems to be an ex-gangster and are quite capable at using guns when the time comes. Like Shaun of the Dead and Attack the Block before it, Cockneys vs Zombies it one hell of a fun horror comedy and I would highly recommend it to anyone looking for a bloody good time. 10 | LOVED IT