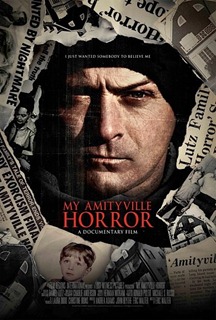 On November 13, 1974, Ronald DeFeo, Jr killed his entire family at their house at 112 Ocean Avenue in Amityville, NY.  13 months later, George and Kathleen Lutz bought the house at the bargain price of $80,000.  28 days later, they abandoned the house with all their possessions inside.  The reported cause for their abandonment of the house was intense paranormal activity.  Their story inspired the 1977 novel The Amityville Horror, which itself was adapted into a 1979 film that inspired countless sequels. My Amityville Horror is a documentary that tracks down the Lutz’s oldest son Daniel and allows him to tell his own side of the story.  The point of the documentary is not to convince you whether or not the hauntings that occurred at 112 Ocean Avenue actually happened.  Instead, it is a character study about a deeply disturbed man, whose life was turned upside down at the tender age of 9. The last 37 years have not been kind to Daniel Lutz.  The events of the haunting and subsequent publicity have clearly traumatized him and it is apparent from the start that Lutz his suffering from some sort of mental ailment.  Unlike George Lutz, who apparently thrived on his association with the Amityville haunting, Daniel does not like talking about the haunting and always hated it when people identified him in association with it.  Daniel also has no love lost for George Lutz, who was his adoptive step-father, and he even states at one point in the film that he is happy that George is dead now. Much of the film consists of a series of interviews with Lutz, in which he revisits the events that occurred in the house.  He said that the strange occurrences began within 2 hours of the family moving in, with Daniel seeing a swarm of flies in in the playroom of the house.  Daniel also states his belief that he was possessed when he was in the house and he even stated that, after the events, priests constantly performed exorcisms on him.  I do have to say that, whether or not you actually believe in the paranormal (for the record, I do), Lutz’s recollections of the events were quite chilling. The documentary also revisits a number of people involved with the incident.  This includes many journalists that covered the story for the news, as well as famous demonologist Lorraine Warren.  There was an interesting aspect during the visit with Warren, in she explicitly asked everyone in the room (including the off-camera filmmakers) if they had faith, before showing off a number of religious relics she had in her procession, which included what was reportedly a piece of the cross Jesus was crucified on.  Lutz gave a very impressed look to the camera, as Warren showed off these relics, which came off as humourous to the audience (the crazy-haired rooster in the house named Einstein also got laughs). One of the biggest questions surrounding the Amityville hauntings involves why there were no paranormal experiences before or after the hauntings.  This has resulted in many to label the hauntings a hoax and that the the Lutzes abandoned the house for financial reasons and came up with the story of the hauntings to profit off of them.  Daniel insists that his entire family (not just one or two people) saw the same thing and, in the years since, he has stopped trying to persuade people that the hauntings were real.  In fact, Lutz gets very angry at one point when the director brings up the possibility of him taking a polygraph exam. One hypothesis given for why the hauntings were concentrated solely on the Lutz family was that George Lutz had a secret interest in the Occult.  The hypothesis, stated by paranormal investigators in the film, is that the DeFeo murders attracted a demonic entity to house and that George’s interest in the Occult triggered the events within the house.  These claims are supported by Daniel, who claims that he saw many Occult books on George’s bookshelf when he first met him.  Daniel also claims that he once witnessed George practicing telekinesis with his friends, long before they even moved into the house. The film tries to give an objective view on the events and interviews some skeptics to give a counter argument to Daniel’s claims.  One skeptic stated that Daniel was so young at the time, that his “memories” are based on suggestion – i.e. he remembers seeing flies because it was in the film.  In addition, the news reporter that covered the events said that he can’t believe that anything happened in the house because he never personally experienced anything during the night he spent in the house, as part of the coverage. Overall, I thought that My Amityville Horror was an excellent documentary.  Not only does it feature a quite chilling recollection of the apparent haunting (an apparent spirit photograph of a boy with glowing eyes will give you nightmares), but it is also an intriguing character study of man who experienced a great trauma as a kid an has never been able to fully recover.  Whether or not you believe in ghosts, My Amityville Haunting is a film I recommend checking out.10 | LOVED IT