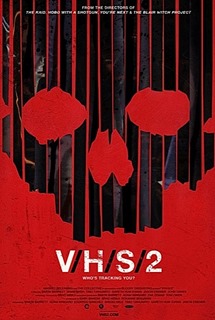 It is time for a second anthology of found-footage shorts with V/H/S/2.  Like the first film, V/H/S/2 centres around the discovery of a collection of VHS tapes, which leads into various short segments by a different indie horror director.  Adam Wingard and Simon Barrett (You’re Next) return from the previously outing and are joined in this instalment by Gregg Hale and Edúardo Sanchez (The Blair Witch Project), Gareth Evans (The Raid: Redemption), Timo Tjahjanto (Macabre), and Jason Eisener (Hobo with a Shotgun).  Despite the film’s title, each segment of V/H/S/2 uses a different filming gimmick, which attempts to give a unique twist to the found footage genre. I figured that it would be most fair for me to review and rate each of the segments individually, before summarizing my thoughts on the film as a whole towards the end. Framing Story: Tape 49
Directed By: Simon Barrett
Shooting Gimmick: None The framing story of V/H/S/2 involves a private investigator and his assistant searching for a missing college student.  This leads them to a house, where they find a pile of tapes and recorded messages from the student stating their importance.  In some ways I can say that this was a better framing story than the first film.  However, it is still nothing other than a way to fill time between each segment.  As such, it doesn’t really stand on its own as a segment in and of itself.  It’s tricky to gauge whether or not anthology films like this even need framing stories, so this is something I can either give or take.
7 | FAIR  Segment One: Phase I Clinical Trials
Directed By: Adam Wingard
Shooting Gimmick: Eye Camera In this segment a man (played by Wingard) gets an ocular implant, which records everything that he sees.  An unfortunate side effect of this implant is that he can now see ghosts around him…and they can see him.  A positive of this segment is that is featured some effective scares, albeit of the jump scare variety.  However, the segment also suffers greatly from the first person perspective, which resulted in some motion sickness for me.  I also wasn’t too crazy with the constant static interference whenever ghosts appeared, since it made it difficult to make out what was going on.  In fact, if it wasn’t for the static I probably would have liked this segment a little better than I ended up doing.
7 | FAIR  Segment Two: A Ride in the Park
Directed By: Edúardo Sanchez and Gregg Hale
Shooting Gimmick: Helmet Camera/Zombie POV As the co-director of The Blair Witch Project, Edúardo Sanchez pretty much started the found footage trend, so it’s nice to seem to team up with producing partner Gregg Hale to direct this unique take on the zombie genre.  The segment features a man going for a bike ride in the park, only to find himself attacked by, and turned into, a zombie.  As such, the rest of the segment is done from the zombie’s perspective, which I have to say was a very inventive twist.  In some ways, this segment is played more for dark humour than horror, however it still ended up being one of the highlights for me.
8 | LIKED IT Segment Three: Safe Haven
Directed By: Gareth Evans and Timo Tjahjanto
Shooting Gimmick: Hidden Spycams/Security Cameras In this segment, an Indonesian documentary crew investigates a cult and finds out the hard way what they were worshiping.  In addition to their normal camera equipment, each member of the crew is wearing a spycam, which allows the action to move between multiple different perspectives (with security footage being used as filler).  I have to say without a doubt that this was the best segment of V/H/S/2 and it’s a shame it wasn’t chosen to close out the film.  While a cult with a crazed leader is more than enough fodder for a decent horror segment, the segment actually goes in a supernatural direction in the latter half, which actually might seem familiar to those who have played the videogame Doom.  I can’t say enough good things about this segment and it’s a bit of a shame I didn’t respond to the other segments in a similar way.
9 | REALLY LIKED IT Segment Four: Slumber Party Alien Abduction
Directed By: Jason Eisener
Shooting Gimmick: Camera strapped to dog In the final segment of V/H/S/2, a bunch of kids are having a slumber party and find themselves chased by alien invaders in the middle of the night.  As the kids run for safety, the action is show from the perspective of a dog, who has a camera strapped to its neck. I’m a bit divided on this segment.  While it is probably the most intense of the segments, it is also marred by a heavy use of static and strobe lights.  Also I’m not too happy with the way this segment concludes.  While, it’s probably the most natural direction for things to go, it still didn’t leave a good taste in my mouth and I’ll admit the segment lost a few points because of it.  That said, Slumber Party Alien Abduction probably my third favourite of the bunch.
7 | FAIR  In conclusion, I probably liked V/H/S/2 slightly less than the previous film.  The freshness of this premise is gone and it seemed much of this anthology is spent on camera gimmicks and distracting glitches.  While I can’t praise Safe Haven enough, it was high point in an anthology that is merely OK.  I can probably say at this point that I’m not really looking forward to a third V/H/S film and I’m hoping that the mass amount of talent involved with this film move on to other things.Overall Rating:
7 | FAIR