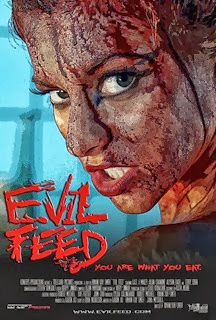 The big world premiere at the 2013 Toronto After Dark Film Festival was the crazy and gory action/horror/comedy Evil Feed.  The film focuses on an underground Chinese restaurant, known as the Long Pig, which is run by the sadistic Steven (Terry Chen) and his sex-crazed assistant and girlfriend Yuki (Alyson Bath).  The restaurant kidnaps marital artists and forces them to fight in cage fights to the death, with the loser being cooked up and served to the high-paying clientele.  When Jenna (Laci J Mailey) and her MMA fighter boyfriend Nash (Sebastian Gacki) are kidnapped and sent to the Long Pig, the trio of Tyrone (Alain Chanoine), Brian (Derek Gilroy), and Carlos (Bishop Brigante) sets out to infiltrate the restaurant and save their friends.  What follows is some very bloody and funny carnage. It is obvious while watching Evil Feed that the film is going for a 1970s grindhouse aesthetic and even goes so far to have the picture appear scratchy.  While the film is indeed very violent and disturbing at times, the film is still for the most part a comedy.  I can say that I enjoyed the film for its camp value, but I’ll also admit that the film’s style of humour is not for everyone.  In addition to the extreme violence and gore, the film is filled with strong Asian stereotypes and some sexual-based humour, particularly involving the Long Pig’s signature dish.  While it’s obvious that the film is not meant to be taken seriously, Evil Feed is a film that is quite likely to offend some people, who don’t share in the film’s sense of humour. The film is filled to the brim with many kooky and crazy characters, such crazed martial artist The Phammer (Johnson Phan), the arrogant Bookie (David Milchard), and the Steven’s British competition Madame Dragonfly (Carrie Genzel).  Probably the most fun character in the film is Alain Chanoine’s Tyrone, who is often seen spouting one-liners and also does the bulk of the fighting in the film.  I also have to give praise for Derek Gilroy as the somewhat naive Brian, who is subject to one of the most shocking and funny scenes in the film.  One nitpick I have is that the character of Jenna is somewhat reduced to being a damsel-in-distress for much of the film, even though she is supposed to be the daughter of a karate master and is even introduced in the film showing that she isn’t a bad fighter herself. Even though Evil Feed is not without its flaws, I will say that I had quite a bit of fun watching it.  The film is not for everyone, but it was still a gory, funny, and overall enjoyable grindhouse homage.8 | LIKED IT