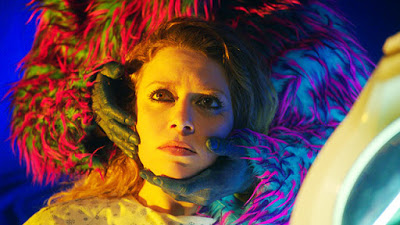 A hard partying woman mysteriously becomes pregnant in Antibirth. After a night of heavy drinking and drug use, Lou (Natasha Lyonne) wakes up with no knowledge of what happened the night before. However, Lou begins to experience symptoms to suggest that she is now pregnant. Lou tries to piece together what happened that night by questioning her best fried Sadie (Chloë Sevigny), drug dealer Gabriel (Mark Webber), and bowling alley employee Warren (Maxwell McCabe-Lokos). Meanwhile, a mysterious and paranoid woman named Lorna (Meg Tilly) believes Lou’s pregnancy is part of a larger conspiracy.

The feature film debut of filmmaker Danny Perez, Antibirth is a messed up body horror comedy about a woman who becomes pregnant under mysterious circumstances. Lou lives a dead-end life as motel housekeeper, who spends most of her free time getting drunk or high. As such, it is not unusual that she blacked out after a night of hard partying. What is unusual is that Lou has mysteriously become pregnant, which is having a very adverse affect on her body and mind.

Antibirth is a film that you can file under “really messed up dark comedies that you will either love or hate.” In typical body horror fashion, there are many gross-out moments, ranging from Lou pulling dead skin off of her neck or puncturing a very gooey blister on her foot. While I was divided on Antibirth for most of the running time, I was finally sold by the film’s completely insane ending, which I was not expecting at all. Antibirth is definitely a film for those whole like messed up and gross weirdness.