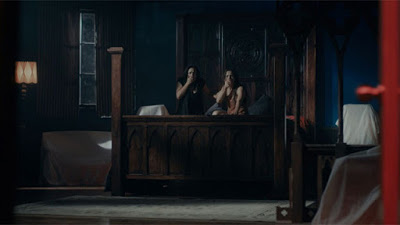 A group of friends find themselves trapped by a cursed bed in Bed of the Dead. Ren (Dennis Andres), Sandy (Alysa King), Nancy (Gwenlyn Cumyn), and Fred (George Krissa) travel to a seedy sex club for Ren’s birthday. Ren bribes the attendant to let them into the forbidden Room 18, which features a large king sized bed. It turns out the bed has a life of its own and kills anyone who gets off it.

Bed of the Dead is a horror film with the relatively simple premise of “get off the bed and you die a gruesome death.” The film uses a flashback structure, where a police investigation of the aftermath by detective Virgil Carter (Colin Price) is used to frame the main narrative of the film. While this does result in a lot of foreshadowing of the deaths in the film, there is an interesting twist to this plot structure that arrives in the film’s second half.

Some of the horror films that Bed of the Dead make me think off include A Nightmare on Elm Street, 1408, The Grudge, and Oculus. The latter might be the most apt comparison, since both films feature an inanimate object has the villain. While having an inherently ridiculous premise, Bed of the Dead ends up being somewhat well-executed, especially when it comes to the film’s extremely gruesome and unique deaths. At the very least, the film will make you think twice before you go to sleep at night.