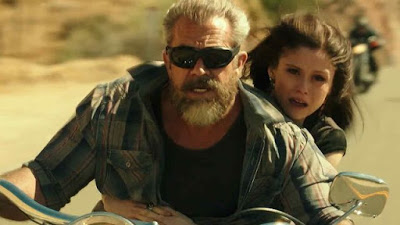 An ex-con fights to save his daughter from a drug cartel in Blood Father. John Link (Mel Gibson) is a man who spent nine years in prison and is now trying to reform himself as a trailer park tattooist, with him being kept in check by his A.A. sponsor Kirby (William H. Macy). John is contacted by his long-lost daughter Lydia (Erin Moriarty), who finds herself on the run after she accidentally shoots her boyfriend Jonah (Diego Luna). With cartel thugs on their tail, John does everything that he can to keep his daughter safe.

In what is being described as a comeback for Mel Gibson, Blood Father is gritty action film about an ex-con coming out of retirement to project his daughter from a drug cartel. John Link spent most of his daughter’s life in jail, so this is a chance for redeem himself in her eyes. However, there will also be a lot of bloodshed along the way.

Mel Gibson’s film career has taken a bit of a downturn over the course of the last decade, ever since incidents in his personal life began to affect audience’s opinions of him. In many ways, Blood Father can be seen as Mel Gibson’s redemption film, since he plays a character who also finds himself at the lowest point of his life. Now in his sixties, Gibson has entered into his grumpy old man phase, though it is peppered with mass amounts of foul language and extreme violence. Despite what you may think of Mel Gibson as a person, Blood Father is still an entertaining action film, which really should be checked out,