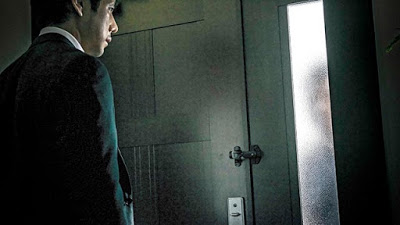 A retired police detective investigates a serial killer in Creepy. Takakura (Hidetoshi Nishijima) is an ex police detective, who now works as a professor in criminal psychology. Recovering from a career ending incident from a year prior, Takakura has moved to a new house with his wife Yasuko (Yûko Takeuchi). One day, Takakura is approached by his old colleague Nogami (Masahiro Higashide) to consult on a cold case involving a family’s disappearance. The investigation leads to the discovery of five vacuum sealed bodies in the abandoned house of the missing family’s neighbour. Takakura soon discovers that there may be a connection to this cold case and his creepy next door neighbour Nishino (Teruyuki Kagawa).

From Japanese horror master Kiyoshi Kurosawa (Cure, Pulse) comes this psychological thriller about a retired detective tracking down a cunning serial killer. As a detective, Takakura was an expert on the psychology of serial killers, but is forced to retire after he is injured in an escape attempt. Takakura becomes curious about this missing persons cold case and is asked to interview the surviving witness Saki (Haruna Kawaguchi). At the same time, Takakura’s wife Yasuko has regular encounters with their neighbour Nishino, who seems somewhat off in his behaviour.

When a film is entitled Creepy, you would expect it to be just that. While the film is never outright scary, it does succeed in giving you the creeps, especially when it comes to the character of Nishino, who you can immediately tell isn’t all that right in the head. What follows is a cat and mouse game, which leads to some pretty dark places. Filled with just as much dark humour than chills, an apt comparison to Creepy would be Joe Dante’s The Burbs. The film isn’t perfect, but Creepy succeeds in being a thriller that gets under your skin.