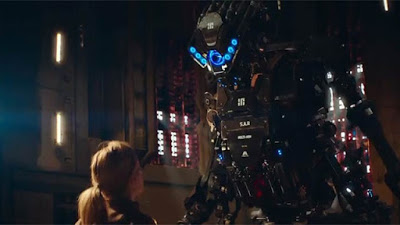 A group of marines face off against autonomous robots in Kill Command. A group of marines lead by Captain Bukes (Thure Lindhardt) and Sgt Drifter (David Ajala) travel to an isolated facility for a training exercise. The marines are accompanied by Mills (Vanessa Kirby), a tech woman whose robotic implants generates a lot of distrust among the marines. At the training facility, the marines find themselves outnumbered by autonomous S.A.R. robots, which become more intelligent with each encounter. As such, this training exercise quickly turns into a fight for survival.

Kill Command is the directorial debut for visual effects artist Steven Gomez. Indeed, the film is a special effects showcase, with some wonderfully constructed killer robots. The robots are designed to Study, Analyze, and Reprogram themselves, which results in the S.A.R.s becoming a difficult to defeat foe for the marines. Then there is the character of Mills, who is part machine herself, which results in a distrustful relationship with the marines, particularly Captain Bukes.

Despite the the film’s quite decent visual effects, Kill Command ends up being a very dull repeat of the typical “man vs machine” science fiction film. At least half the film is spent with the marines patrolling through the woods, getting picked off one-by-one by the robots. There are so many films that does this type of story better, whether it be last year’s Ex Machina or even 2013’s The Machine. Kill Command only succeeds in making a film about killer robots quite boring. At least the effects are good.