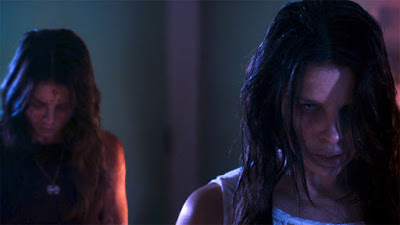 A young woman finds herself tormented by her inner-self in Let Her Out. Helen (Alanna LeVierge) is a young woman, whose mother killed herself 23 years earlier at a grungy motel. One night, while outside the motel, Helen is struck by a car and receives major head trauma. While she does recover, Helen begins to experience blackouts, awakening in unusual places, as well as a voice in her head telling her to do things. Helen soon discovers that she had a twin sister absorbed in utero, who now seemingly wants out.

Cody Calahan (Antisocial) directs this film, which can be described as “body horror with a multiple personality twist,” with the story built around the rare condition of Vanishing Twin Syndrome. After her accident, Helen finds that a lot of her actions are unaccounted for, causing some concern for her best friend and roommate Molly (Nina Kiri). It is soon discovered that Helen is literally turning into a new person, as her long dead twin sister wants her turn at life.

I have to admit that Let Her Out left a bad taste in my mouth at the very start when the violent rape of Helen’s prostitute mother is used as a plot device to set the story in motion. I kept my mind open for the rest of the film, however Let Her Out ended up being a very schizophrenic mess of a body horror film. Many of the attempts at horror come across as laughable (stethoscope to head anyone?) and the gory climax arrives a bit too late for me to care. At the very least, I can say that Let Her Out is very stylishly shot, with many red and blue tones and impressive looking Toronto landscapes. If only the story matched the visuals.