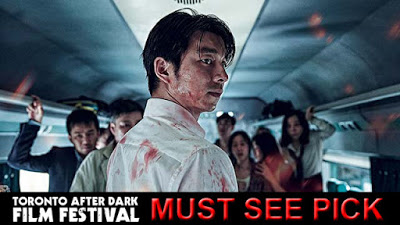 This is a capsule version of a previously published review

A zombie outbreak occurs aboard a train in Train to Busan. Seok-woo (Gong Yoo) is an overworked man, who barely has time to spend with his daughter Su-an (Kim Su-an). Su-an wants to travel from Seoul to Busan to visit her mother and Seok-woo accompanies her on the train ride. However, it turns out that a zombie outbreak has started to occur and one of the infected boards the train right before it pulls out of the station. It isn’t long before all hell breaks loose and Seok-woo must fight to protect Su-an and ensure they make it to Busan safely.

Breaking all sorts of records in its native South Korea, Train to Busan shows that there is still some gas in the tank of the zombie apocalypse genre of horror film. While “zombies on a train” may sound like a gimmick in writing, Train to Busan is a quite well executed film that is incredibly entertaining to watch. While the relationship, between Seok-woo and Su-an make up the main emotional core of the film, the film also focuses on a handful of other survivors, such as Sang-hwa (Ma Dong-seok) and his pregnant wife Seong-kyeong (Jung Yu-mi).

Probably one of most creative aspects of Train to Busan is the fact that the zombies will only attack if they see or hear a living person. This results in multiple sequences where the survivors have to take advantage of the zombies’ limited vision in the darkness of tunnels in order to sneak past them undetected. While Train to Busan features some very entertaining zombie-fighting action, there is a real emotional core to film. Pretty much everyone in the core group of survivors is likable, so it is quite sad whenever one of them becomes a zombie victim. Altogether, Train to Busan is a quite entertaining Korean zombie film.