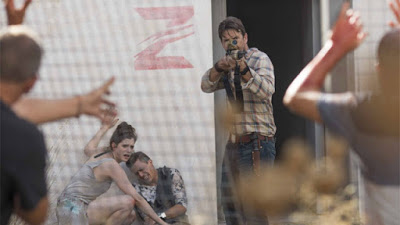 Things go wrong at a zombie hunting paradise in The ReZort. Ten years following a zombie outbreak, one of the biggest tourist attractions is The ReZort, where people can pay to shoot the remaining undead from a safe distance. Melanie (Jessica De Gouw) comes to The ReZort with her boyfriend Lewis (Martin McCann) in an effort to relieve her post traumatic stress. The two head out into the island with a group that includes sniper Archer (Dougray Scott), pacifist Sadie (Elen Rhys), and over-eager teens Jack (Jassa Ahluwalia) and Alfie (Lawrence Walker).  After things go wrong and the zombies get free, the group has only a few hours to get off the island, before an airstrike arrives to neutralize the treat.

The best description of The ReZort is that it is a combination of a typical zombie apocalypse film with Jurassic Park. In this post zombie apocalypse world, a business woman named Valerie Wilton (Claire Goose) has taken one of the last infected islands and turned it into a paradise, where paying visitors can make their fantasies come true. However, things quickly go wrong and chaos ensues on the island, resulting in the activation of the “Brimstone Protocol,” where an airstrike is called in to take care of the situation.

It is a bit hard to gauge what type of film The ReZort is going to be at the start of the film, which portrays this island paradise as a place where gun-crazy folks come to party hard and then shoot zombies in a literal shooting gallery. However, things fall into place when the carnage begins and the focus settles on the core characters. While not the most original zombie film in the world, The ReZort ends up being quite decent, with there even being a bit of a message.