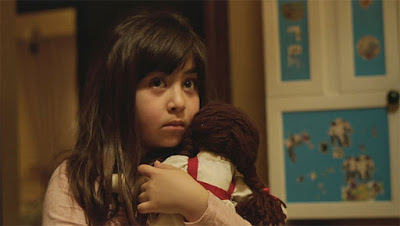 A woman and her daughter encounter a paranormal force during the Iran-Iraq war in Under the Shadow. Shideh (Narges Rashidi) is a woman living in a Tehran apartment complex with her husband Iraj (Bobby Naderi) and young daughter Dorsa (Avin Manshadi). As Iran’s war with Iraq begins to heat up, Iraj is drafted to the frontlines and Shideh and Dorsa are encouraged to leave the city. However, Shideh decides to remain at home and, following a devastating missile attack, she becomes concerned with Dorsa’s increasingly erratic behaviour, which may be connected to an entity that is possibly haunting them.

In a similar fashion to how Guillermo del Toro set his ghost story The Devil’s Backbone against the backdrop of the Spanish civil war, Babak Anvari’s Under the Shadow is set during the 1980-88 Iran-Iraq war, which was one of the most devastating wars in history. Shideh and Dorsa find themselves tormented by a Djinn (Arabic demon), which seemingly attaches itself to Dorsa, causing strain in her relationship with Shideh.

It is a bit hard to classify Under the Shadow as a horror film, since much of the running time focuses on the wartime mother-daughter drama. While the film does feature the odd jump scare throughout, it really isn’t until the climax when the paranormal activity takes over the plot. This isn’t necessarily a bad thing, however it does make Under the Shadow a much slower paced film, which might test the patience of some viewers.