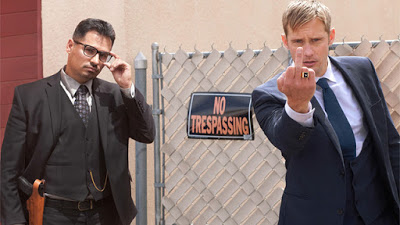 Two corrupt cops investigate a robbery gone awry in War on Everyone. Terry Monroe (Alexander Skarsgård) and Bob Bolaño (Michael Peña) are two police detectives, who have little concern with following the letter of the law or their orders from Lt. Gerry Stanton (Paul Reiser). The duo’s current plan involves stopping a robbery and taking the money for themselves. However, the cops find themselves outsmarted by crime boss James Mangan (Theo James), who has his own plans for the town.

John Michael McDonagh (The Guard, Calvary) directs this incredibly politically incorrect take on the buddy cup comedy. Terry and Bob are as corrupt as they come, routinely using unneeded aggression to apprehend criminals and partaking in recreational drug use with their informant Reggie (Malcolm Barrett). The two stake out an upcoming robbery with the plan of taking the $1 million haul for themselves. However, they are beaten to the punch by James Mangan, who will turn out to be the duo’s greatest foe.

War on Everyone is undoubtedly a pretty funny film, with Terry and Bob practically being the worst cops you can come across. The film is peppered with much colourful language, casual drug use, and extreme violence. However, all that is not really enough to prop up a somewhat weak and generic story, complete with a British villain. While individual scenes of War on Everyone are great, the film as a whole is only a mild pass.