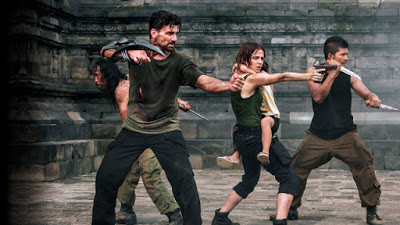 An LA cop joins other survivors to fight back against an alien invasion in Beyond Skyline. Mark (Frank Grillo) is a Los Angeles police officer, who begrudgingly picks up his trouble-making son Trent (Jonny Weston) from the police station after getting into an altercation. While on the subway heading home, an alien force arrives and begins harvesting humans. It isn’t long before Mark, Trent, transit officer Audrey (Bojana Novakovic), and others find themselves beamed on board the alien ship. With the help of a rogue alien drone, Mark causes the ship to crash land in Indonesia and he is tasked to protect a rapidly aging alien/human hybrid baby. Joining forces with local drug runner Sua (Iko Uwais), Mark comes up with a plan to fight back against the invaders.

Beyond Skyline is the follow-up to the poorly received 2010 sci-fi film Skyline. However, instead of being a direct follow-up, this “sidequel” from first-time filmmaker Liam O’Donnell, who was a writer and producer for the first film, shows the alien invasion from an entirely different perspective, resulting in Beyond Skyline being more of a standalone film. In addition to being a sci-fi/action film, Beyond Skyline also features elements of martial arts, featuring The Raid stars Iko Uwais and Yayan Ruhian, and even a large-scale kaiju-like battle.

You wouldn’t expect there to be a follow-up to a seven year old sci-fi bomb. However, here we are with Beyond Skyline, a film that is much more entertaining than it ever deserves to be. Other than a few allusions, this film is completely independent from the original and essentially allows filmmaker Liam O’Donnell to start fresh and develop this concept beyond what was shown in the original. While far from perfect, Beyond Skyline can probably be filed along with entertaining sequels that surpass their original.