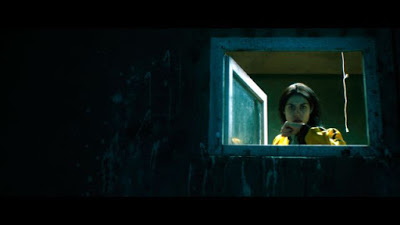 An Austrian taxi driver is targeted by a serial killer in Cold Hell. Özge Dogruol (Violetta Schurawlow) is a Turkish-born taxi driver in Vienna, who witnesses the murder of a prostitute in the apartment adjacent to hers. Özge is spotted by the killer, who makes her his next target. After her cousin is murdered and Özge is attacked and left for dead, she takes shelter with police detective Christian Steiner (Tobias Moretti), while vowing revenge against this serial killer.

Cold Hell is an Vienna-set crime thriller about a taxi driver, who crosses paths with a serial killer, who seems to be targeting sinful Muslim women. Özge is a strong and independent woman, who trains as an MMA fighter and doesn’t put up with the men around her. When Özge is attacked by the serial killer and left for dead in the river, she vows revenge against the perpetrator. Receiving reluctant assistance from police detective Christian Steiner, the two try to decipher the identity of this killer.

At times I felt that Cold Hell was trying a bit too hard to be the next Girl with the Dragon Tattoo, with a dark and gritty subject matter that focuses heavily on misogyny and in some ways religious extremism. Probably the biggest saving grace of Cold Hell is a strong lead performance by German actress Violetta Schurawlow and her ability to beat up men real good. However, other than Schurawlow, there is nothing much to really take away from Cold Hell.