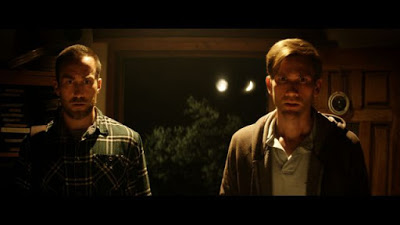 Two brothers return to the cult they escaped as teenagers in The Endless. Justin (Justin Benson) and Aaron (Aaron Moorhead) are two brothers, who gained notoriety and press when they escaped the “UFO Death Cult” Camp Arcadia many years prior. While Justin has resumed somewhat a normal life, Aaron misses the time he spent with them. After receiving a video from Camp Arcadia talking about an upcoming event known as The Ascension, Aaron convinces Justin to travel back to Camp Arcadian and reconnect with the members, who worship a higher power in the woods.

For their third feature film, directors Justin Benson and Aaron Moorhead return somewhat to the universe of their 2012 debut film Resolution, reprising the roles of the cult members they cameoed as in that film. Having long excised themselves from the group at Camp Arcadia, brother Justin and Aaron Smith make their return to the cult, reuniting with fellow members Hal (Tate Ellington), Tim (Lew Temple), Anna (Callie Hernandez), Shane (Shane Brady), and Smiling Dave (David Lawson Jr.). Aaron immediately feels right back at him, though Justin is still critical of the cult’s beliefs. However, he soon begins to find signs that there may indeed be a higher power watching over them.

After receiving immense praise for their sophomore film Spring, Justin Benson and Aaron Moorhead bring things down a notch with The Endless, a film they decided to make while waiting for larger projects to get off the ground. The Endless can be considered a follow-up of sorts to Resolution, though it’s also its own thing, with a story that features elements of both horror and science fiction. The plot becomes a bit of a mind twister and The Endless ends up being much more than simply a tale of two brothers returning to a cult.