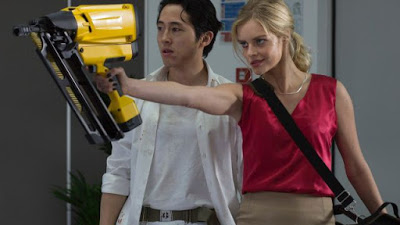 A viral outbreak results in bloody chaos in an office building in Mayhem. The Towers and Smythe consulting firm is placed under 8 hour quarantine following an outbreak of the ID-7 or “Red Eye” virus, which causes a drop in inhibitions, resulting in those infected to often have violent outbursts. Having been fired immediately prior to the outbreak, legal associate Derek Cho (Steven Yeun) decides to take advantage of the legal impunity given to those with the virus and enact violent revenge on the company’s CEO John Towers (Steven Brand). Teaming up with disgruntled client Melanie Cross (Samara Weaving), the two fight their way up to the top floor of the office.

From director Joe Lynch (Knights of Badassdom) come Mayhem, which is just as the title describes. Derek Cho has worked to hard to get to his place in at TSC, even though it cost some of his humanity. Soon after refusing to help Melanie Cross with her foreclosed mortgage, Derek takes the blame for a legal blunder in another case and ends up being fired. However, before he is escorted from the building, the office is placed under quarantine with an outbreak of the inhibition-limiting ID-7 virus. What follows is eight hours of complete chaos, with Derek setting out to get revenge on those who wronged him.

Mayhem has a plot quite reminiscent of The Belko Experiment, though this film has a much more tongue-in-cheek tone to it. Essentially, Mayhem is about what would happen if you had the freedom to kill your boss, without having any legal consequences. Various power tools and office appliances are utilized as weapons as Derek and Melanie fight their way to the top floor of their office building. The result is a quite violent and fun to watch film.