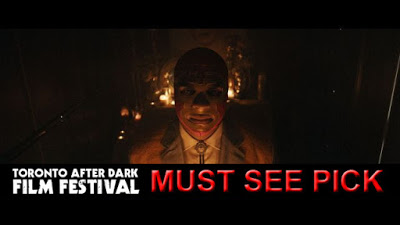 The activities of an organ harvesting ring are shown from multiple different perspectives in Lowlife. El Monstruo (Ricardo Adam Zarate) is a disgraced luchador hero, who is working as muscle for Teddy ‘Bear’ Haynes (Mark Burnham), who runs a prostitution and organ harvesting operation under his taco restaurant. Crystal (Nicki Micheaux) is a motel manager, who desperately makes a deal with Teddy to harvest the organs of her daughter Kaylee (Santana Dempsey), who happens to be El Monstruo’s pregnant wife. Then there are Keith (Shaye Ogbonna) and Randy (Jon Oswald), two ex-cons who are forced to do a job for Teddy in order to play off a debt.

The feature film debut for director Ryan Prows, Lowlife is a Tarantino-esque multi-POV heist film, which plays out the events of a single day from the perspective of various different protagonists. Undoubtedly the most interesting of these is the luchador El Monstruo, who is prone to monstrous fits of rage, which often leave someone dead or without body parts. Another interesting character is the thug Randy, who has a swastika tattooed on his face, for no reason that is made apparently clear. The lives of all the protagonists eventually cross as they all gain a common enemy in Teddy “Bear” Haynes.

Lowlife is a film that took me a little while to latch on to. In fact, it probably wasn’t until the third or fourth chapter when I truly started to get interested in the plot. It is somewhat obvious that Lowlife is trying to mimic the style of Quentin Tarantino, with its askew narrative, dialogue heavy scenes, and extreme violence. However, Lowlife is also it’s own film and by the end the film turned out to be a pretty engaging heist film.