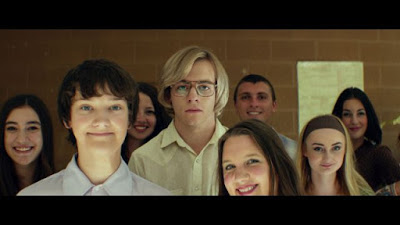 The teenage years of future serial killer Jeffrey Dahmer are chronicled in My Friend Dahmer. In the year 1978, Jeffrey Dahmer (Ross Lynch) was a socially awkward high school senior living with his mentally unstable mother Joyce (Anne Heche) and chemist father Lionel (Dallas Roberts), the latter of whom is concerned about Jeff’s obsession with animal bones. After Jeffrey receives attention for “spazzing” at school, fellow student Derf (Alex Wolff) and his circle of friends decide to exploit Jeff’s weirdness for their entertainment.

My Friend Dahmer is a biopic based on the graphic novel by artist John “Derf” Backderf about his teenage friendship with infamous serial killer Jeffrey Dahmer. The film portrays Dahmer as a very socially awkward man with an obsession with the inner biology of animals. A closeted homosexual with a rough home life, things seem to look up as Jeff begins hanging out with Derf and his friends. However, they just want to laugh at Jeff’s odd behaviour and they don’t consider the effect this has on Jeffrey Dahmer’s psyche.

Are serial killers born or are they made? That is the apparent question at the center of My Friend Dahmer, which explores the sequence of events that turned Jeffrey Dahmer into a serial killer of 17 young men between 1978 and 1991. Did he inherit his mother’s mental illness and father’s insecurity? Was his closeted homosexuality the cause? Did the exploitation of Jeff by Derf and his friends push him over the edge? Or was it a combination of all the above? The result is a sometimes disturbing, often sympathetic look into the creation of one of America’s most notorious killers.