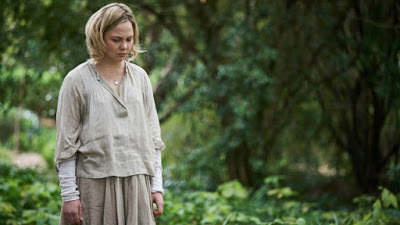 A woman travels to an isolated commune to locate her missing twin sister in Rabbit. Maude (Adelaide Clemens) has been tormented by vivid nightmares about her missing twin sister Cleo. Believing the nightmares reveal where Cleo disappeared to, Maude travels with Cleo’s fiance Ralph (Alex Russell) and police detective Henry (Jonny Pasvolsky) to a commune lead by Nerida (Veerle Baetens). Guided by her continuing dreams, Maude hopes to unlock the secrets hidden in this commune.

The feature film debut from Australian filmmaker Luke Shanahan, Rabbit is a thriller that explores the almost supernatural connection between twins. Even though it has been over a year since her twin sister Cleo went missing, Maude refuses to accept that she is dead, since Maude has been having extremely realistic dreams, which reveal Cleo’s whereabouts. It isn’t long before Maude herself is imprisoned by the commune and subjected to a number of tests in relation to Maude’s apparent psychic connection to Cleo.

The apparent psychic connection between twin siblings is a topic that is quite compelling to explore. Rabbit is a film that tries to do just that, with a narrative that contrasts the behaviors of Maude and Cleo (both played by actress Adelaide Clemens). However, Rabbit suffers somewhat from its slow and puzzling execution, which features many sudden cuts and a general confusion about what’s going on. While the film does come together by the end, Rabbit was still a somewhat dull cinematic experience.