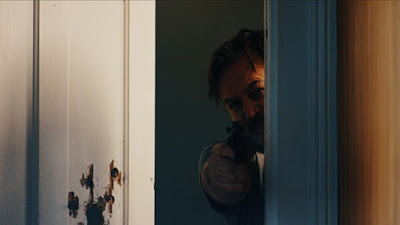 A war veteran tries to survive a deadly game show in Sixty Minutes to Midnight. Jack Darcy (Robert Nolan) just wants to spend New Year’s Eve 1999 alone at his house with a bottle of Jack Daniels. However, Jack finds himself an unwitting contestant on the game show “Race the Clock” with Bud Carson (Terry McDonald), where Jack will win $1 million if he survives an hour long assault by armed assassins. Jack must rely on his military training if he ever expects to survive the night.

From director Neil Mackay (Battleground) comes the action-thriller Sixty Minutes to Midnight. Veteran Canadian character actor Robert Nolan stars as Vietnam veteran Jack Darcy, who now works as a construction worker in Texas. Other than sharing drinks with his buddy Markus Brody (Arnold Sidney), Jack lives a relatively isolated and lonely existence. However, this all changes when Jack finds himself drafted as a contestant of a viral game show, where he has to survive an armed assault for sixty minutes. However, what these assassins didn’t count upon was for Jack to fight back.

Sixty Minutes to Midnight is a film than can probably be best described as a mix between Die Hard and The Running Man. While the plot of this film isn’t all that original, it is still quite produced, especially for an independent Canadian production. Sixty Minutes to Midnight relies almost entirely on the performance of Robert Nolan’s grizzled war veteran, who fights back against swarms of armed introduces. In some ways, the film and its Texas setting can be viewed as a commentary on American’s obsession with guns and violence for entertainment. While it’s far from perfect, Sixty Minutes to Midnight still has some quite entertaining moments.