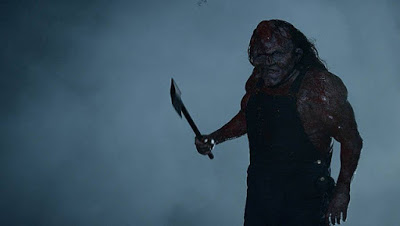 The undead killer in the swamp returns after a decade of inactivity in Victor Crowley. Andrew Yong (Parry Shen) is the sole survivor of the massacre at Honey Island Swap ten years ago and he has written a book about how he escaped the undead killer Victor Crowley (Kane Hodder). Andrew is coerced by his publicist Kathleen (Felissa Rose) to return to the swamp to do an interview with talk show host (and Andrew’s ex-wife) Sabrina (Krystal Joy Brown). Meanwhile, aspiring filmmaker Chloe (Katie Booth) is trying to make a movie about the killings with her boyfriend Alex (Chase Williamson), make-up artist best friend Rose (Laura Ortiz), and tour guide Dillon (Dave Sheridan). However, Victor Crowley is accidentally awoken and resumes his killing spree.

Victor Crowley is the fourth entry in director Adam Green’s Hatchet franchise, arriving four years after 2013’s Hatchet III. The film can both be considered a follow-up and a soft reboot of the series, as Victor Crowley has laid dormant for a decade. However, after recordings of a voodoo curse is played by Chloe and her friends, Victor Crowley rises from the swamp and begins to kill again. The survivors take shelter in a crashed airplane and try to find a way to survive the night.

I never bothered with any films in the Hatchet series before now and Victor Crowley does not make me want to go back and watch the others. This film magnifies all the worst aspects of slasher films, with stereotypical and unlikable characters, who are just there to be butchered in extremely brutal ways. By the third or fourth kill, I stopped caring about who was going to survive, since it is obvious that Adam Green was more concerned with extreme gore than any sense of character development. Not a fan.