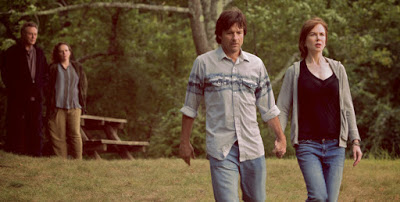 Two siblings deal with their performance artist parents in The Family Fang. Annie and Buster Fang (Nicole Kidman and Jason Bateman) are two siblings, who are still trying to cope with their parents Caleb and Camille’s (Christopher Walken and Maryann Plunkett) infamous status as performance artists. When Caleb and Camille goes missing one night, Buster is worried about his parents’ safety, while Annie just believes it’s just their greatest stunt. This leads to the siblings to investigate and come to terms with their family legacy.

The Family Fang is the second directorial feature for actor Jason Bateman, which also continues his slow move into a more dramatic direction. The film is about two siblings, who have become all but estranged from their parents, due to their forced involvement in various performance pieces. The Family Fang moves back and forth between the present plot and flashbacks showing the family’s performance pieces, which include fake bank robberies and somewhat incestuous performances of Romeo and Juliet. Annie grew up to become a struggling actress, while Buster became a writer and both try their hardest to separate themselves from their family’s legacy, even though it keeps pulling them back.

The Family Fang is a quite well done drama, which investigates the relationship between this family and what exactly constitutes art. Christopher Walken gives a standout supporting performance in the film as Caleb Fang, who believes quite deeply in the art his family has been creating over the decades. The film also features solid performances by Nicole Kidman and Jason Bateman in the lead roles. Overall, The Family Fang is a very solid character study looking at the intersection of family and art.