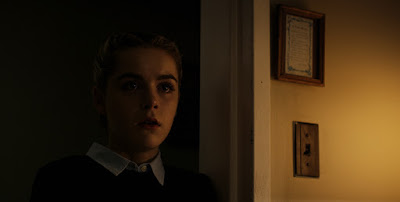 Two girls alone at a boarding school encounter an evil demonic presence in February. It is late February, and the Branford all-girls boarding school is preparing to go on break. However, the parents of neither Katherine (Kiernan Shipka) or Rose (Lucy Boynton) have arrived yet to pick them up, so they are left alone at the school. However, Katherine begins to act strangely at night and may have come in contact with a demonic presence.

Writer/director Oz Perkins makes his feature film debut with this horror film about two girls at a boarding school. I can’t delve deeply into the plot of the film, without getting into spoiler territory, but I will say that the film also has a parallel plotline, in which a hitchhiker named Joan (Emma Roberts) is picked up by a man named Bill (James Remar) and his wife. The connection between these two stories aren’t immediately apparent and the second might come off as a bit distracting from the main plot at the boarding school.

Lead actress Kiernan Shipka is best known for her role as Don Draper’s oldest daughter Sally on Mad Men. In February, the actress goes into some very dark places, in what is a much more adult role for the former child actress. February opts more for atmosphere than outright scares, with there being a heavy use of shadows and a bass heavy soundtrack. The film also opts to show events from multiple perspectives, leading to the violent climax. Altogether, February is a solid demonic boarding school thriller.