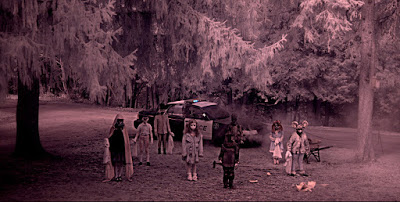 Bruce McDonald makes his return to the horror genre with the twisted Halloween fantasy Hellions. One Halloween, in the small town of Waterford, Dora Vogel (Chloe Rose) finds out that she is pregnant. Unsure how to respond to this news, Dora stays home as her mother and young brother goes trick-or-treating. However, Dora soon finds herself tormented by demonic children, who have sinister intentions for Dora and her unborn child.

It was seven years ago when Bruce McDonald (Hard Core Logo) had a hit with his horror-comedy Pontypool. McDonald makes a long-awaited return to the genre with Hellions, which focuses on some very demonic and sinister trick-or-treaters. Like Pontypool, the bulk of Hellions takes place in the single location of Dora’s house, though she receives some assistance throughout the night by Dr. Henry (Rossif Sutherland) and police officer Mike Corman (Robert Patrick).

Hellions is a very surreal horror film, with the world around Dora’s house taking on a very pinkish hue to it. Most of the actual violence in the film is done off camera, even though there are many bloody moments throughout the film. Since Dora’s pregnancy plays a major role in the plot, Hellions can almost be seen as a metaphor of the fear and stress that can come from teen pregnancy. Hellions is not a perfect horror film, but it does end up being a solid, surreal, and quite twisted tale of Halloween terror.