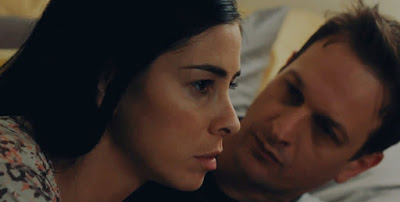 A housewife suffers from a self-destructive bout of depression in I Smile Back. Laney Brooks (Sarah Silverman) is a woman who lives with her husband Bruce (Josh Charles) and two young children. Despite appearing to be happy in public, Laney is suffering from a serious bout of depression, which is compounded by her doing cocaine in the washroom and having an affair with family friend Donny (Thomas Sadoski). As Laney’s behaviour gets increasingly self-destructive, it threatens to tear apart her relationship with her family.

With I Smile Back, Sarah Silverman sheds her typical role as a comedian for a very serious dramatic performance as a woman suffering from depression. Silverman is quite excellent in her performance in the film, even if some of the self-destructive actions that Laney performs in the film can be hard to watch at times. Particularly difficult is Laney’s crumbling relationship with her husband Bruce, who becomes increasingly distrustful of her and just wishes that she would be “happy, like she used to be.”

It’s probably too her to tell whether I Smile Back will bring Sarah Silverman some awards consideration, however it is definitely brave for her to star in a role that is so against type. I Smile Back just goes on to demonstrate that actors, who are considered to be comedians, don’t have to remain pigeonholed in funny roles and that they are perfectly capable for putting on a serious face from time to time.