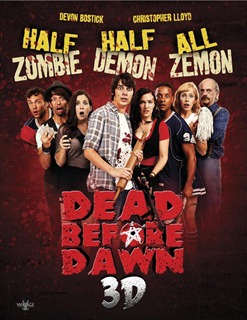 The closing film of the TIFF Next Wave Film Festival for Youth was the official North American premiere of this Canadian horror-comedy, which put a twist on the overused zombie apocalypse premise.  The film is notable for the fact that it is the first Canadian film to be shot in stereoscopic 3D (more on that later). Dead Before Dawn 3D focuses on a college student named Casper Galloway (Devon Bostick), who is called by his grandfather Horus (Christopher Lloyd) to look after his occult shop, while Horus goes off to accept a lifetime achievement award from the Occult Society.  Casper is deathly afraid of the shop, after a traumatic experience from childhood, but agrees to do so anyway.  Horus warns Casper to make sure no one goes close to the cursed urn that sits high on the shelf.  However, when Charlotte (Martha MacIsaac), the girl Casper has feelings for, turns out to be a huge occult geek, Casper takes down the urn to impress her. When the urn promptly breaks, Casper’s friends make fun of the curse by joking that anyone they make eye contact with (past 10:00pm) will promptly kill themselves and reanimate as half-zombie, half-demons (aka zemons).  They would go on to joke that the zemons would infect others by giving them hickies, can be made slaves by seduction, and that the curse has to be broken by dawn.  As it turns out, the curse makes everything they joked about come true and Casper and his friends rush to to break the curse before it is too late. Let me just say that I had mixed feelings about Dead Before Dawn 3D.  The acting in the film is quite bad, particularly in the first act.  The film was made with a teenage audience in mind and apparently that involves a very low-brow brand of humour and heavily stereotypical characters (Charlotte’s über-jerk of a boyfriend is the worst offender).  That said, I found that the film fared a little better once the zemons entered the picture.  Even though the film does feature some gory action, I felt that the violence was kept to a minimum to ensure the film gets a low enough rating (i.e. 14A in Ontario) to be seen by its target audience. As for the 3D, I do have plenty to say in that regard.  Not only was this film the first Canadian production to be filmed in 3D, but it was also the 3D film with the all-time lowest budget, and to be completely honest, I noticed it.  Even though it was the filmmakers intention to film more for depth than pop-out effects, I have to say that the 3D effects were barely noticeable.  In fact, the most notable 3D effects were during the Star Wars-esque crawl of the closing credits.  In the few times there were a pop-out effect, they were done using low-grade computer graphics that were very obviously fake on screen.  This film seemed to be a case of making a film 3D just for the sake of doing it and it didn’t seem like the film was blocked well enough to take full advantage of the 3D medium.  In other words, this is a film that you don’t need to see in 3D. Even though he has what is essentially just an extended cameo, used to put a well-known name on the poster, I thought that Christopher Lloyd was one of the best elements of the film.  The purpose of the character of Horus is just to provide some important exposition before exiting, but Lloyd hams the character up in a way that only he can.  In fact, the most crowd-pleasing moment in the film comes in the form of an intentional call-back to Christopher Lloyd’s most famous character (you don’t need to think too much to know who that is). In conclusion, as a low-budget Canadian horror-comedy aimed at teens, I would say that Dead Before Dawn 3D has some merits.  However, personally, I thought that the film was a mixed bag with some elements I liked and others I didn’t. 6 | WATCHABLE