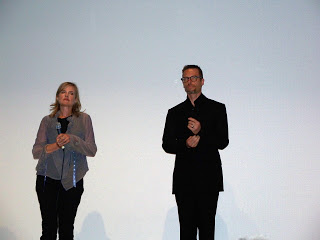 Alright, it is now time for be to sum up the films that I saw at this year’s festival. This year, I shattered my record of the number of films I saw. I was a grand total of 11 ticketed films this year, plus one film I kind of saw while being stationed in the theatre on my volunteer shift. I highly doubt that next year will be as crowded as this year has been, since all these films really exhausted me.

Before I go to my individual film thoughts, I will quickly list my top 3 favourite films of the festival (I’ll saw why in my thoughts):

So, now I will go through each film, in the order I saw it, and write my thoughts on it.

Stuck
Stuck was a horror film that was part of the Midnight Madness programme. What attracted me to seeing this film was the fact that the premise sounded quite original and different than the other gorefests that were playing. In this film, a nurse (played by Mena Suvari) runs over a newly homeless man (played by Stephen Rea) and leaves him for death, with him stuck in her windsheild, in her garage.

Most of the rest of the plot involves Rea’s character trying to escape despite the fact that he was severely injured. The film is more about building suspense than cheap thrills and I found that it was quite effective. While, the film is not goreless, any gore that is used in the film is used to help with the suspense (such as a scene where Rea is trying to reach for a cell phone, while a piece of jagged metal is digging deeper into his side.

I definitely enjoyed this film.

The Take
This was one of the few premier screening I went to this year. It’s a film about an armoured car driver (played by John Leguizamo), who was shot in a robbery and is trying to deal with the resulting brain damage and getting revenge on the man did it to him (played by Tyrese Gibson). It was a pretty good enough film. The screening was a bit marred by a brief power outage during the film, but it was OK overall.

After the screening there was a Q&A. I actually got to ask a question at one point about what was the meaning of the title of the film. The director starting talking about how it was almost something he change, and then John Leguizamo took the mic and starting ranting on everything that went wrong with the production and how “The Take” was the perfect title, since it took so much out of the crew. That really made my night.

Paranoid Park
The first film of my marathon of films on Thursday was the latest film by Gus Van Sant. I would have to say that I was a little disappointed. It was a fair enough film, but I have to say that it was the most “arty” film of the festival. The narrative is very fragmented and out of order, which makes it a bit hard to follow at times. There was an overuse of slow motion in the film, which took me out of it (especially at 9am screening). In fact there were many interesting uses of the cinematography and sound, such as a shower scene set to the sound of rain. However, when the film finally ended, I can probably say that I was glad. Oh yeah, the story is about a skateboarder, who accidentally kills someone. However, there is not much of a resolution to that plot, so I don’t know if it really matters.

King of California
This film was a joy after sitting through Paranoid Park in the morning. This film is produced by Alexander Payne and it starts Michael Douglas and Evan Rachel Wood. The film was essentially a two person show between Douglas, who plays an apparently crazy man on a treasure hunt, and Wood, who plays Douglas’ daughter. I quite enjoyed this film. It was just a nice light comedy, which I could just sit back and enjoy.

Death Defying Acts
This was the second premier that I attended during the festival. This film is about a romance that occurs between Harry Houdini (played by Guy Pearce) and a Psychic (played by Catherine Zeta-Jones). It was a okay enough film. There was nothing too spectacular about, but I enjoyed it.

After the film, there was a Q&A with the director and Guy Pearce. There is nothing really anything of note that happen then.

Here is a picture from the Q&A:

Smiley Face
Now this is a film that I really enjoyed. This film is very light and fun stoner comedy about a girl (played by Anna Faris), who has to go through her tasks for the day, while stoned out of her mind. This was a very funny film and it was all thanks to Faris, who you really believed was stoned beyond belief. Some of the things she did in the movie (such as using three whole sticks butter, while trying to make cupcakes) was hilarious. Also, the way she reacted to most situations was funny too.

This was definitely one of my favourite films of the festival.

Married Life
While the previous morning screening, Paranoid Park, was a little hard to watch, this film was quite enjoyable. This film is about a man (played by Chris Cooper), who is unhappy with his marriage and tells his best friend (played by Pierce Brosnan) that he wants to leave his wife and marry his mistress (played by Rachel McAdams). Brosnan’s character then falls for McAdams character and hilarity ensues. That’s not all the plot, but that’s the gust of it. This film is not very complex, but it was still quite enjoyable.

I’m Not There
This movie is about Bob Dylan, however at the same time it’s not. Basically the film takes Dylan’s many personalities over the years and creates six totally different stories about then, with the Dylan-character being played by a different actor. The actors that play the different characters are Christian Bale, Cate Blanchett, Marcus Carl Franklin, Heath Ledger, and Ben Whishaw. The film goes back and forth between the different stories and, as a result, makes things a bit hard to follow. I have to say that Cate Blanchett is surprisingly good and playing Dylan in his heyday. I would say that she could get an Oscar nomination for that role. As for the other actors, they were just alright. I’m still trying to comprehend how Richard Gere’s character relates to Dylan, since the film turns into a Western for his scenes.

It should be noted that even though the director couldn’t stay for the film, he offered to do the Q&A before the film, which was neat.

Rails and Ties
This was the final ticket I bought. The film was directed by Clint Eastwood’s daughter Alison. There was nothing too special about this drama, which is about a train engineer (played by Kevin Bacon), who takes in a boy whose mother was killed by his train. This film is a bit a melodrama, with some other plot point, such as the fact that Bacon’s wife (played by Marcia Gay Harden) is dying of cancer. It was okay enough, especially considering the fact that I purchased the ticket last minute.

Nothing is Private
Now, it seems fitting that the final film I saw at the film festival ends up being my favourite of the bunch. This is directed by Alan Ball, who won on Oscar for writing American Beauty and later created the TV show Six Feet Under. I find the film is close to Six Feet Under in how it mixes serious drama with quirky comedy (a couple of dream sequences in the film are really close to the show). The film deals with a 13 year old Lebanese girl, who is dealing with racism and sexuality in a suburban Texas neighbourhood. There is some disturbing content in the film, mostly involving the character played by Aaron Eckhart, who develops pedophilic obsession with the girl. The title comes from the fact that nothing is private in a the neighbourhood, especially from the kind, yet nosy, neighbour (played by Toni Collette). Despite the disturbing scenes, I really enjoyed this film and it deserves it’s place as my favourite film of the festival.

And that’s the end of the Toronto Film Festival for 2007. Until next year.