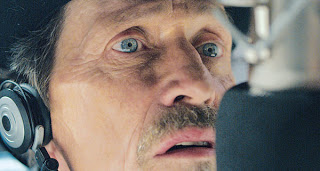 When you volunteer at the Toronto Film Festival, how your day turns out depends on where you assigned by the volunteer captain. I already spoke about how I thought Sunday was an off day for me. In contrast, I am considering today to be my most rewarding volunteer shift in the three years I have been volunteering at the festival.

It started about a bit on the iffy side when I was minding a screening that had a lot of patrons, who forgot their ticket stubs in the theatre and wanted me to remember them as they went to the washroom (it got to the point that there were multiple people at once wanting that exception). There was also confusion at that screening by a patron that was still wearing a volunteer t-shirt (which is considered a no-no).

However, things got much better later in the afternoon as I was assigned at the screening of the Bruce McDonald zombie film Pontypool (ironically, I was positioned at a screening of the same film earlier in the week).

I had actually been reading about the film earlier in the day and I figured that I wouldn’t mind asking to be positioned inside the theatre (which results in you being able to see the film while you’re working).

My first position was acting as a seat guard for a row of reserved seats. This was a neat task, especially when Bruce McDonald stood right by me for a few minutes as his guests were entering the row.

When everyone was seated and the film was started, I began working as usher, guiding latecomers to empty seats. I went up to a man and asked him if he needed help finding a seat. The man turned to me and said that he was okay and I realized then that this man was none other than Atom Egoyan (who was then directed to a seat by a staff member). I later found out that Brian DePalma was also in attendance, but I’m not sure if I saw him (thinking back, he might have passed by me as he was leaving).

After a few minutes of steady ushering, I stood in the back and watched the film (no more than a few feet away from where Atom Egoyan was sitting I might add):

My Thoughts on Pontypool

This is an interesting (and slightly comedic) take on the zombie film. For starters, they weren’t really zombies, but more people that go crazy after saying certain words.

The film also greatly uses the “less is more approach” as we learn of a lot of the horror through calls to a radio station (which is the scene of the film) and you don’t really start seeing any of the zombies until later in the film.

I thought that this film was really well done (especially for a Canadian film) and I think it can stand along with some of the films that come from the US. I would have to say that is probably my favourite film of the festival so far and I’m glad I got a chance to see it.

And so that ends my volunteering year on bit of a storybook note. It’s fitting, since next year I am planning on applying to become a volunteer captain and that will change the tasks that I have been doing at the festival since 2006.

Tomorrow is the final day of the festival and I’m hoping to fit in three films, so look forward to my thoughts on them in the evening, followed by my wrap-up on Sunday.