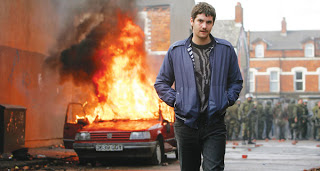 Most of the films I’ve seen at the festival were pretty light-hearted affairs. However, the films I saw last night and this morning were, in contrast, quite serious.

Good is a story about a German university professor (Viggo Mortensen), who joins the Nazi party and slowly moves from being a “good” guy to being totally assimilated into the party.

This film is all about the consequences of the choices we make and it was a quite good morality tale.

Fifty Dead Men Walking is a co-production between the UK and Canada and it’s about how a young Belfast man (Jim Sturgess) is recruited by a British agent (Ben Kingsley) to infiltrait and report on the IRA.

This film was a pretty intense film, with some scenes being a bit disturbing. However, I also thought that it was a very good film. It really shows how dark a place Northern Ireland was during “The Troubles.”

That’s all from the festival for today.