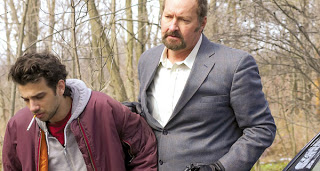 I saw my first film of the Film Festival today with the Canadian film Real Time, a darkly comic film about a hitman (Randy Quaid) giving a gambler with huge debts (Jay Baruchel) an hour to make peace before killing him.

As the title suggests, the film was shown in real time and the film is for the most part a two-man show between Quaid and Baruchel.

I quite enjoyed the film and it was definitely a great way to kick off my festival (viewing) experience.